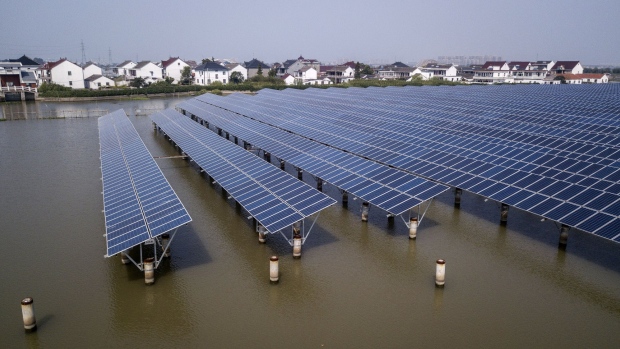 Photovoltaic panels stand at a solar farm operated by China Energy Conservation and Environmental Protection Group in this aerial photograph taken on the outskirts of Jiaxing, Zhejiang province, China, on Friday, Sept. 7, 2018. China is stepping up its push into renewable energy, proposing higher green power consumption targets and penalizing those who fail to meet those goals to help fund government subsidies to producers. Photographer: Qilai Shen/Bloomberg , Bloomberg

(Bloomberg) -- China’s leading solar association called on the government to provide support to the industry as measures to contain the outbreak of a virus are hampering the restart of manufacturing activity.

The requests come as more than a dozen Chinese provinces have extended the new year holiday until the end of Feb. 9 in a bid to halt the spread of the virus that has killed hundreds of people and sickened thousands. Investors are trying to quantify the impact of the disruptions, including a slowdown in construction activity as workers struggle to return from their home cities.

“The sudden epidemic is affecting the pace of development of the solar industry,” Liu said in a phone interview. He added that it’s “highly likely” the government will delay the tariff cuts, but it’s unclear how long it will be.

The next cut in tariffs for unfinished solar projects approved for 2019 subsidy quotas is expected at the end of March. China has been scaling back financial support to the solar industry as it pushes for renewable energy to compete economically with conventional power sources such as coal and natural gas.

CPIA is also asking the government to reduce taxes and fees for solar manufacturers, and for financial institutions to extend interest payment dates to help cushion the hit from the virus, Liu said.

The association is evaluating the impact on solar production and shipments, and is gathering feedback from companies. It will submit the findings to authorities in the next few days, Liu added.