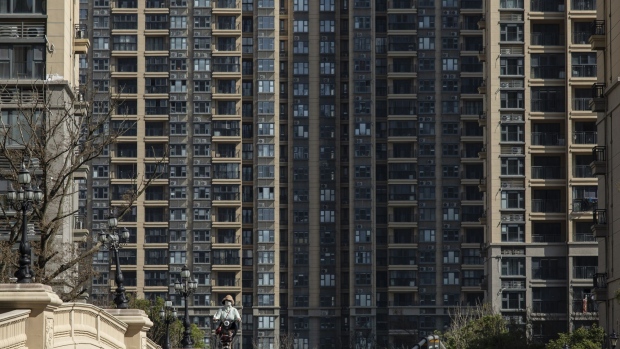 (Bloomberg) -- Anxiety arising from China Evergrande Group’s debt crisis seems to have moderated, with mainland stocks declining less than expected on Wednesday as they resumed trading.

The CSI 300 Index trimmed losses to 1.1% as of the mid-day lunch break after falling as much as 1.9% at open, as Evergrande’s onshore unit plans to pay interest due Thursday on a yuan bond. Market participants said the development could provide support to stocks battered by regulatory worries, with an injection of short-term cash by the People’s Bank of China also boosting sentiment.

Here are some analyst views on the price action on Wednesday:

“There is evidently a large disparity between what onshore stock investors make of the Evergrande risks and the broader pessimism offshore. I agree with local investors that Evergrande ultimately will not be a systemic risk, and authorities will take action to prevent it from being one, and this difference in attitudes stems from different read of the government need to get involved in risk containment.”

“However I don’t think the news today changes much and I won’t be trading much on company headlines since I believe that it will not be systemic and will only affect property and companies in the supply chain.”

“I think we may be seeing a temporary reprieve with some repayments aiding to provide a better-than-expected situation than many would expect. This also comes along with some injection of short-term funds by the PBOC, which suggests that they are monitoring the situation closely and are ready to step in if the economy comes under risks.”

Short-term traders or investors that use momentum-driven quantitative strategies “are likely to initiate long positions for a potential mean reversion rebound play plus risk/reward ratio of such trading strategies are attractive at this level,” he said.

The Evergrande coupon news “has added another layer of positive feedback loop in terms of short-term sentiment that is likely to prevent the CSI 300 from a much more pronounced decline,” after the Hang Seng Property Index went into oversold territory this week.

Evergrande news “will be helpful and hopefully suppress some of the inevitable volatility and downside after the holiday break. That said for confidence to return more meaningfully will need the market to see sight of the broad restructuring plans for Evergrande.”

Thomas Westwater and Daniel Dubrovsky, analyst and strategist at DailyFX:

“A liquidity injection from the People’s Bank of China accompanied the Evergrande announcement, which only served to bolster sentiment further,” Westwater and Dubrovsky wrote in a note. “Chinese policymakers stopped short of cutting 1- and 5-year loan prime rates, however. For now, it appears that market-wide contagion risk linked to a potential Evergrande collapse is off the table.”

“Evergrande is still likely to default. This is not a company specific issue, this is a structural issue that will impact the entirety of the Chinese developer space but this will not become systemic. We see potential buying opportunities in less leveraged developers with lower inventory levels but we do not see this as a contagion risk for the rest of the region at all.”