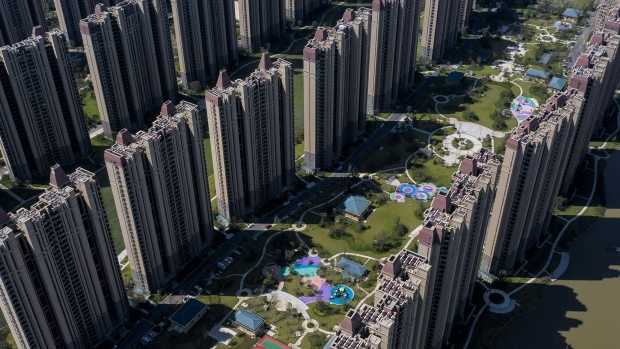 (Bloomberg) -- China’s banking regulator vowed to keep its curbs on the nation’s property market, dismissing concerns that the crisis enveloping China Evergrande Group will have any major impact on the credit profile of the sector as a whole.

The property controls have achieved good results and the government will refrain from using the real estate sector as a short-term economic stimulus measure, Liu Zhongrui, an official at the China Banking and Insurance Regulatory Commission, said at a briefing in Beijing on Thursday. Evergrande is an “individual” case and won’t hurt the overall credibility of Chinese firms, which is backed by the country’s economic stability, he said.

Property controls to stamp out speculation in the housing market have weighed on the country’s indebted developers, which are now seeing sales plunge and home prices snapping a years-long streak of increases. While officials have told banks to speed up mortgage lending again, the central bank has indicated that contagion risks from Evergrande are “controllable” and unlikely to spread.

Property lending growth at Chinese banks slowed to 8.6% this year through September, Wang Zhaodi, a spokesman at the CBIRC, said. That’s down from 12% in the first quarter, which was the slowest pace in eight years.

New-home prices in 70 cities fell 0.08% in September, the first drop in six years, official data showed this week, posing a potentially big blow for an economy that counts on property-related industries for almost a quarter of its output.

Evergrande shares plunged Thursday after saying it scrapped talks to offload a stake in its property-management arm and that real estate sales slumped during a peak home-buying season, worsening its liquidity crisis.