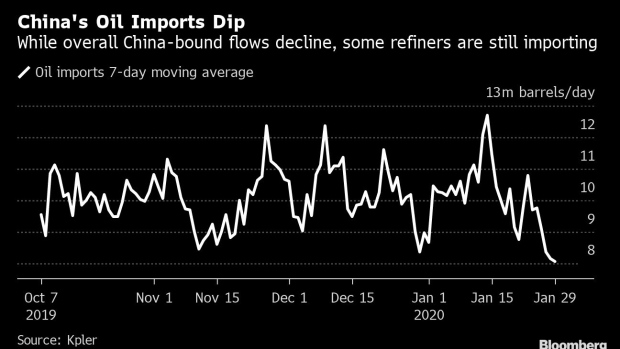 After weeks of production cuts, cargo deferrals and cancellations because of the deepening impact of coronavirus on Chinese crude demand, companies including Shandong Shouguang Luqing Petrochemical Co., Shandong Huifeng Petroleum Chemical Co. and Sinochem Hongrun Petrochemical Co. have returned to the market in a big way.

They’re all non-state-owned refiners, known as teapots, from the eastern province of Shandong. Until recently, this corner of the industry appeared to be doing everything to avoid buying crude including cutting processing rates.

But then Luqing snapped up as many as seven cargoes from Russia, Angola and Gabon for March and April, while Sinochem Hongrun bought a shipment from Gabon and Huifeng was also looking for spot cargoes, according to traders with knowledge of the market.

The spree is probably a sign that the refiners known as teapots are getting ready for an eventual rebound in demand, taking advantage of the slump in crude prices to buy cheaply, according to the people. The timing of a recovery in China’s oil demand, which by some estimates has been reduced by 20% because of the virus, is the subject of great speculation in the market because getting it right could be very profitable.

Luqing bought ESPO, Gindungo and Oguendjo grades in the spot market this week, said the traders who asked not to be identified as the information isn’t public. Hongrun purchased Mandji, while prompt supplies of other crudes such as Lula and Johan Sverdrup were also being offered and may have traded. International trading companies were among the sellers.

Nobody answered telephone calls or responded to emails sent to Luqing and Huifeng, while Hongrun declined to comment when contacted by phone.

Spot premiums for crude delivered to Shandong plunged by more than 50% against the global benchmark Brent since the market began taking notice of the outbreak in mid-January, according to industry consultant IHS Markit Ltd.

The traders were cautious on whether the teapot purchases signaled a recovery in Chinese crude demand as many of the nation’s refineries are still running at reduced operating rates, and travel curbs keep consumption of transport fuels low. Some teapots are also laden with debt, weighing on their credit-worthiness and hindering operations.