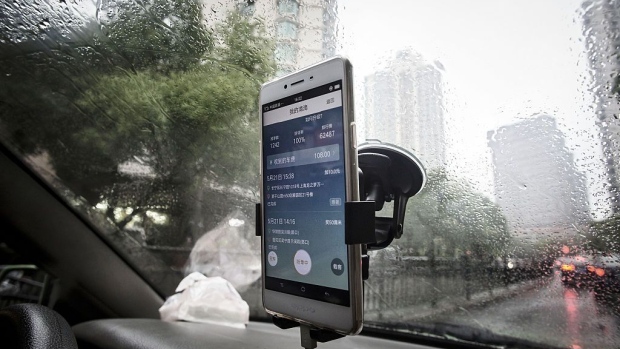 The Didi Chuxing application is displayed on a smartphone screen onboard a vehicle in Shanghai, China, on Sunday, May 22, 2016. Philippe Laffont's Coatue Management LLC, which manages more than $7 billion, has backed China's biggest ride-hailing app Didi Chuxing as it competes with Uber Technologies Inc. , Photographer: Qilai Shen/Bloomberg

(Bloomberg) -- Chinese ride-hailing company Didi revealed a $1.6 billion net loss for 2020 as it moves ahead with plans for a U.S. initial public offering.

The company listed its offering size as $100 million in its first public filing for the IPO Thursday, a placeholder that’s likely to change. It filed under the business name Xiaoju Kuaizhi Inc., with Goldman Sachs Group Inc., Morgan Stanley and JPMorgan Chase & Co. listed as advisers.

Didi, one of the largest investments in SoftBank Group Corp.’s portfolio, has been accelerating its listing plan after its business rebounded post-pandemic. The company has been considering seeking a valuation of as much as $70 billion to $100 billion in the IPO, Bloomberg News reported in April.

An IPO would cap a remarkable turnaround for a company that ran afoul of first regulators and then Covid-19. It hopes to tap the same investor enthusiasm that propelled tech debuts this year from Chinese video service Kuaishou Technology to South Korean e-commerce pioneer Coupang Inc.

The company plans to list under the symbol DIDI, according to Thursday’s filing, although it didn’t specify on which exchange.

Didi was founded in 2012 by former Alibaba Group Holding Ltd. staffer Cheng Wei. It clashed with Uber Technologies Inc. in China for years until the U.S. firm retreated in 2016, selling its operation in the country to its local rival.

The company is looking for capital to expand into online commerce and bankroll a major foray into Europe. Didi, which remains the dominant player in China, is also looking to leverage that lead to expand into adjacent arenas from autonomous driving to electric vehicles.