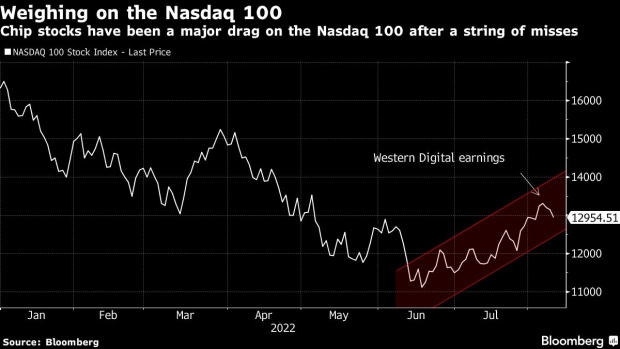 In the US, the Philadelphia semiconductor index sank 4.6% on Tuesday with all 30 members in the red, its biggest fall in about two months. In Asia, chip stocks from Taiwan Semiconductor Manufacturing Co. to Samsung Electronics Co., SK Hynix Inc. and Tokyo Electron Ltd. slumped. Investors are growing increasingly skittish the notoriously cyclical industry is hurtling toward a prolonged slump after years of widespread shortages that led to heavy investments in capacity.

“We continue to believe we are entering the worst semiconductor downturn in at least a decade, and possibly since 2001 given the expectation of a recession and inventory build,” Christopher Danely, a Citigroup Inc. analyst, said in a report. “We expect every company in our coverage universe and every end market to experience a correction.”

The warning from Micron came after disappointing results from Nvidia Corp., Intel Corp. and Advanced Micro Devices Inc. Highlighting the speed with which demand is evaporating, Micron said orders have deteriorated since the company last gave an update just over a month ago. While the personal computer market had already been in a slump, the weakness in demand is now spreading widely.

“Compared to our last earnings call, we see further weakening in demand because of adjustments broadening outside of just consumers to other parts of the market including data centers, industrial and automotive,” Chief Executive Officer Sanjay Mehrotra said in an interview with Bloomberg Television.

Semiconductor stocks surged at the start of July, driven in part by expectations that endemic shortages will prop up demand even in the midst of an economic slowdown. But they became a major drag on the broader Nasdaq 100 Stock Index after a string of disappointing financial results and forecasts from chipmakers including Nvidia. The benchmark rallied nearly 20% from a June low before memory and hard disk drive maker Western Digital Corp. helped fuel a selloff in the wake of a weak sales forecast on Aug. 5. The Nasdaq 100 has fallen for three straight days since.

“It appears to be a challenging market for everyone after both Nvidia and Micron had to slash their outlooks,” said Edward Moya, senior market analyst with Oanda.

During the Covid pandemic, consumers stocked up on smartphones and computers as they worked and studied from home. Corporations poured money into technology too, especially data centers that could be used to enable remote workers.

Chip shortages remain a factor. The average wait times for semiconductors soared to 27 weeks in June, with companies from Toyota Motor Corp. to Apple Inc. losing out on billions of dollars in sales because they couldn’t get enough chips. Before the pandemic, average lead times were typically less than 15 weeks.

On Wednesday, TSMC reported a 50% surge in July revenue, underscoring major industry players were still benefiting from competition for supply.

Skeptics warned that customers could be double ordering chips, artificially inflating the perception of demand. But companies like TSMC poured money into capital expenditures, while governments from the US and Europe to China and Japan embraced subsidies to build up domestic production capabilities. The fears now are that such turbo-charged investments will lead to overcapacity and persistent losses.

“The whole chip sector boomed after the pandemic and now we are seeing a bit of backlash,” said Yasuo Imanaka, chief analyst at Rakuten Securities. “The demand boost for smartphones and PCs from remote working is clearly disappearing. And we should be wary of risks that inventory adjustments are not as mild as Micron and other companies were hoping for just a couple of months ago.”

On the same day as Micron’s warning, US President Joe Biden signed the Chips and Science Act, a $52 billion stimulus package designed to make it cheaper for companies to build domestic factories.

Danely of Citigroup said it was particularly concerning to learn about automakers and other corporations cutting back.

“Micron is the first company to mention weakness in the automotive and industrial end markets, and we would note Micron has been a leading indicator in the downturn all year,” he wrote. “We reiterate our negative stance on semis and belief that every stock and every end market will correct.”

Not all companies are getting enough chips. Toyota said its ability to secure semiconductors will remain unpredictable, as it kept a conservative profit outlook for the current year.

“We see chip supply improvement since the second half of this year as we predicted in previous quarters, particularly for our PC and smartphone businesses,” he said. “But we still see some supply constraints in the low-end chips.”

Makers of equipment used in the production of chips were among the biggest decliners on Tuesday after Micron said it plans to reduce spending on new plants and equipment in response to a drop-off in orders. Lam Research Corp. fell 7.9%, while Applied Materials sank 7.6%.

Of the 10 worst performing stocks in the Nasdaq 100 this month, at least seven are chip stocks. Marvell Technology Inc. is down 7.9%, followed by Lam Research and NXP Semiconductors. The semiconductor index has fallen 27% this year, compared with a drop of 20% for the Nasdaq 100 and 14% for the S&P 500.