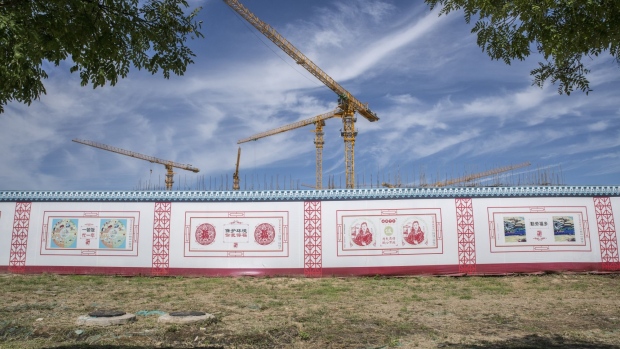 Outside the China Evergrande Group Royal Mansion residential development under construction in Beijing, China, on Friday, Sept. 17, 2021. China Evergrande Group plans to let consumers and staff bid on discounted properties this month to repay them for billions in overdue investment products as the embattled developer seeks to preserve cash, according to people familiar with the matter. Photographer: Gilles Sabrie/Bloomberg , Bloomberg

(Bloomberg) -- The biggest U.S. banks appear to be sidestepping any fallout from the crisis at indebted developer China Evergrande Group that sparked a widespread selloff in stocks this week.

Citigroup Inc. has no direct lending exposure to Evergrande, a spokeswoman said. JPMorgan Chase & Co. and Bank of America Corp. also have no such links, according to people familiar with the matter, who asked not to be identified discussing private information. Bank of America has no indirect exposure because it limits business in China to subsidiaries of U.S. companies, one of the people said.

“Our indirect exposure through counterparty credit risk is small and with no single significant concentration,” Danielle Romero-Apsilos, a spokeswoman for Citigroup, said in an emailed statement.

Representatives for JPMorgan, Bank of America and Goldman Sachs Group Inc. declined to comment. A Morgan Stanley spokesperson didn’t immediately respond to a request for comment.

No U.S. banks are listed on Evergrande’s principal bankers list, according to a report from debt research firm CreditSights. Goldman Sachs and JPMorgan appear on the developer’s bondholder lists, but “largely through asset-management arms and at small ultimate dollar amounts,” analysts led by Jesse Rosenthal wrote in the report on Monday.

China’s Evergrande, with more than $300 billion in liabilities, is considered the world’s most indebted developer. With the biggest U.S. banks having spent years trying to gain a greater foothold in China, fears for Evergrande’s fate have left investors trying to assess the potential impact on the global financial system and the broader economy.

Citigroup, which generated more revenue from its overseas operations than it did from North America in the second quarter, saw its total exposure to the country increase slightly to $19.8 billion in the period compared with a year ago. That was still just 1.1% of the firm’s overall loans and commitments.

Citigroup’s portfolio in China is largely made up of loans to sovereign entities and multinational companies and has had “low loss levels for many years,” Romero-Apsilos said.