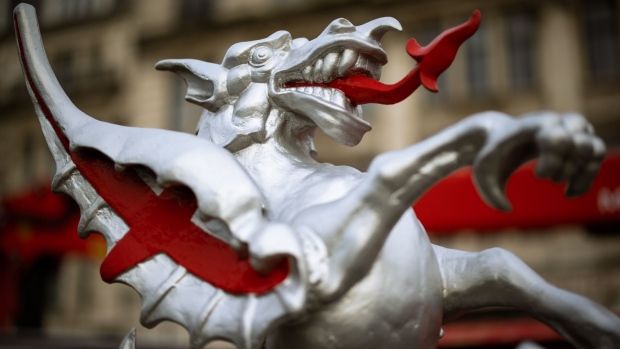 A statue of a dragon marks the boundary of the City of London, U.K., on Monday, Jan. 18, 2021. Britain's divorce deal barely touches banking and trading, and Europe is eager to develop its own financial center. Photographer: Jason Alden/Bloomberg , Bloomberg

(Bloomberg) -- The City of London Corporation pledged to slash emission rates for its 3 billion pounds ($4.1 billion) of investments and hold fund managers more accountable as part of its plan to achieve net zero carbon by 2040.

The governing body of London’s financial district outlined targets for 2025 as part of the longer-term strategy, in a statement Monday. They include cutting the assets’ emissions intensity by 24% and ensuring that managers comply with expectations such as support for climate change shareholder resolutions and requiring investee companies to set clear decarbonisation targets.

The City of London is the latest organization to announce ambitious net-zero emission targets ahead of the COP26 climate talks that Britain will host next month. An increasing number of financial institutions including banks and asset managers have committed to ambitious goals, though few have established how they will reach these targets.

“Financial services must play a key role in the fight against climate change,” Catherine McGuinness, policy chair at the  Corporation, said in the statement. “Preparing our own investment portfolio and encouraging our investment managers towards a climate change transition is not only the right thing to do, but it also makes economic sense.”