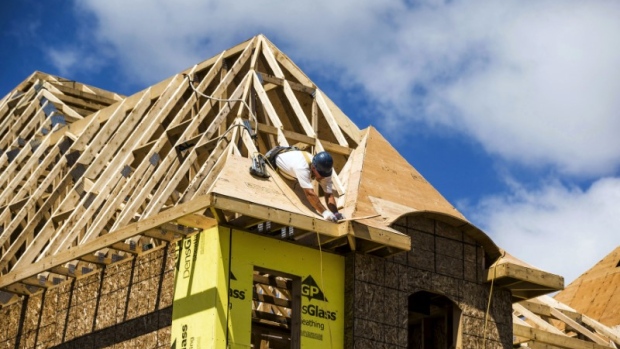 A construction worker works on a new house being built in a suburb located north of Toronto in Vaughan, Ontario , Reuters

The housing agency said the seasonally adjusted annual rate of housing starts fell to 173,153 units in February compared with 206,809 units the month before.

Economists had expected an annual pace of 205,000, according to Thomson Reuters Eikon.

"As a leading indicator of economic activity, February's steep decline in housing starts may raise some eyebrows in Ottawa," Fotios Raptis, senior economist at TD Bank, wrote in a report.

"Although housing starts seemed to be unscathed by the new B-20 regulations that took effect in January 2018, higher borrowing costs and tougher mortgage qualifying conditions may finally be taking a toll on new residential construction."

Rising mortgage rates and tighter lending rules have been blamed for the slowdown in sales, prompting some to call on the federal government to make changes in the upcoming federal budget to help first-time homebuyers.

CIBC economist Royce Mendes said 2019 is shaping up to be a tougher year for homebuilding.

"Residential investment was downright ugly in the fourth quarter, and the latest reading on housing starts only added to the bad news on Canadian homebuilding," Mendes wrote.

"Prior to this reading, starts had seen a bit of a renaissance, rising back above 200,000 for four straight months. But the market has been a contending with the effects of higher interest rates and stricter lending standards, and a pace of 200,000 looked unlikely for the year as a whole."

The overall decline in the pace of housing starts came as the annual rate of urban starts fell 18.0 per cent in February to 155,663 units.

The pace of urban multiple-unit projects such as condominiums, apartments and townhouses fell 20.2 per cent to 116,284 units, while single-detached urban starts dropped 10.6 per cent to 39,379 units.

Rural starts were estimated at a seasonally adjusted annual rate of 17,490 units.

The six-month moving average of the monthly seasonally adjusted annual rates of housing starts was 203,554 in February, down from 207,742 in January.