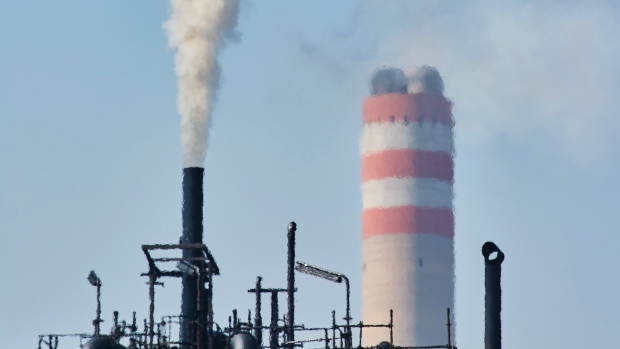 (Bloomberg) -- Global carbon emissions from power plants may be headed for a record high this year after summer droughts and heatwaves boosted coal- and natural gas-fired generation.

The jump in fossil fuel use pushed emissions from electricity production up 1.7%, or 133 million tons, in the first eight months of this year, climate think-tank Ember said in a report Wednesday. Most of the increase was in July and August, as fossil generation was unchanged in the first half from a year earlier.

Heatwaves disrupted electricity demand and grids across the world this summer. A historic drought in China hurt hydropower output as demand soared, while in Europe, reservoir levels fell and nuclear generation plunged as France grappled with repairs for its aging plants.

“We can’t be sure if we’ve reached peak coal and gas in the power sector,” Malgorzata Wiatros-Motyka, senior electricity analyst at Ember, said in the report. “Global power sector emissions are still pushing all-time highs when they need to be falling very quickly.”

Still, renewable sources of power rose by 416 terrawatt-hours, which was more than the 389-terrawatt-hour increase in global electricity demand, according to the report. Wind and solar alone met 77% of the growth. Such a boost in renewables saved $40 billion in fuel costs and also curbed 230 million tons of carbon emissions, Ember said.

“Wind and solar are proving themselves during the energy crisis,” said Wiatros-Motyka. “The first step to ending the grip of expensive and polluting fossil fuels is to build enough clean power to meet the world’s growing appetite for electricity.”

Ember analyzed data from 75 countries that make up 90% of global power demand for the study.