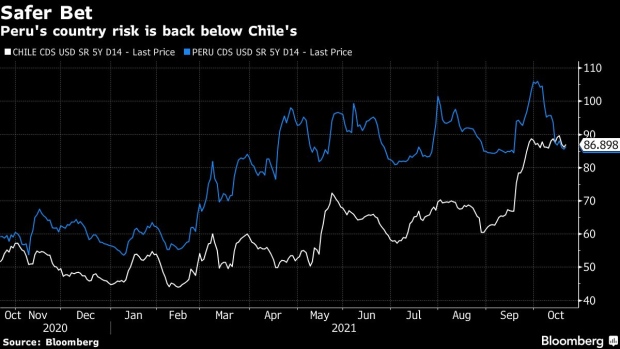 (Bloomberg) -- Political uncertainty ahead of Chile’s presidential elections and the possibility of another round of pension withdrawals have been pushing the country’s bond yields higher, weakening the peso and hitting equities.

That’s also deepening the nation’s divergence with Latin American neighbor Peru, which is enjoying a respite in market volatility amid recent signs of moderation by recently assumed president Pedro Castillo. Such deviation is visible in their respective country risks, measured by the cost of insuring against nonpayment. Peru’s five-year credit default swaps recently fell below Chile’s for the first time since early 2020.

Larrain Vial recently reiterated an overweight recommendation for Peruvian stocks, even after a rally that began after the resignation of Prime Minister Guido Bellido.

Meanwhile, Chilean shares got an underweight recommendation from BCA Research, which also reiterated a call to short the peso versus the U.S. dollar, saying that left-wing candidate Gabriel Boric will likely win the Nov. 21 election.

Chile is “undergoing a major shift of policies from neoliberalism to the left,” BCA analysts Juan Egana and Arthur Budaghyan said in a note. “We maintain our view that such a shift to the left is not necessarily devastating for the country in the long run. Chile is not set to become Argentina or Venezuela.”