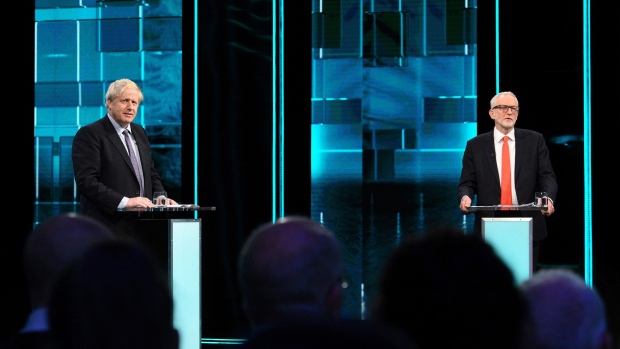 In this photo issued by ITV, Boris Johnson, left, and Jeremy Corbyn, during their election head-to-head debate live on TV, in Manchester, England, Tuesday, Nov. 19, 2019. , (ITV via AP)

The opposition leader, who’s been lagging behind Johnson in personal approval scores, effectively tied with the premier in a snap poll on which candidate won the clash Tuesday night. The pound remained lower after the survey.

That was a significant turnaround for Corbyn, 70, who has struggled to persuade the public that he is prime minister material.

He went into the election campaign with a net satisfaction rating of minus 60. That was by far the lowest such score since IpsosMORI started tracking the ratings in 1979. Johnson’s score stood at plus 2 when the figures were compiled at the end of October.

While Corbyn fared better than expected this time, his party remains stuck behind the Conservatives in the polls. It was only one debate, and more are planned, including another head-to-head between the two leaders on Dec. 6.

Between the finger pointing and befuddled stares, we counted how many times the words "NHS" and "Brexit" were mentioned in the U.K. #LeadersDebate

(P.S. There was only 1 hair ruffle) pic.twitter.com/NF2FUp9nnJ

The YouGov verdict followed an hour of clashes between the two men vying to lead the U.K. in what is one of the highest stakes elections in recent British history.

When voters cast their ballots on Dec. 12, they will face a choice between Johnson’s promise to deliver a speedy Brexit and Corbyn’s pledge to call another referendum on European Union membership that could ultimately allow the divorce to be canceled.

Corbyn received applause and landed verbal punches on Johnson, 55, who struggled to win over an audience that laughed and groaned as he tried to steer the topic back to Brexit.

In his most successful moments, Corbyn said he would give the prime minister a festive present of Charles Dickens’s classic short story, ‘A Christmas Carol,’ so he could learn how “nasty” the miserly Scrooge was. Corbyn also attacked the royal family over its handling of Prince Andrew’s friendship with the pedophile Jeffrey Epstein, saying the monarchy needed “improvement.”

Corbyn struggled to shake off allegations that antisemitism is rife inside the Labour Party, and was mocked by some audience members for claiming his policy on Brexit was clear, when he could not say whether he would vote to remain or leave the bloc in a referendum he’s promising to hold. But he won a cheer for promising to end the privatization of the National Health Service.

🎄What gifts would the 2 rivals give each other this Christmas?

Johnson had one big message: That he could get Brexit done – and quickly. It served him well in the opening 20 minutes, but then his repeated attempts to make it all about Brexit began to look forced. For example, when trying to think of a Christmas gift for Corbyn, he said he’d send him a copy of “my brilliant Brexit deal.”

There were other awkward moments for the Tory leader. Some audience members laughed when Johnson said he believed trust was important in politics.

The theme of trustworthiness also featured in the spin battle between the rival parties afterward. Tory Foreign Secretary Dominic Raab appeared among reporters backstage in Salford, northwestern England, to say “there is a real issue of trust” with Corbyn’s Brexit stance. Labour’s trade spokesman accused Johnson of telling “lie after lie after lie.” YouGov’s pollsters found Corbyn beat Johnson 45% to 40% on trustworthiness.

“The choice is very simple: we can get Brexit done or we can spend another year with another referendum,” Johnson said in his closing remarks. “If we have a working majority Conservative government, I pledge we will have a Parliament that works for you, that focuses on the NHS and the cost of living, because when we get Brexit done by Jan. 31 we will go forward.”

Corbyn used his final message of the night to promise to protect the NHS and invest in “good jobs” across the country. “Vote for hope and vote for Labour on the 12th of December,” he said.

According to the YouGove poll, Corbyn beat Johnson 59% to 25% on being in touch with ordinary people. But Johnson beat Corbyn 54% to 29% on appearing prime ministerial and 54% to 37% on being likeable.

Although the headline result was a draw, 67% of respondents thought Corbyn performed well, against 59% for Johnson. That suggested the Labour leader had done better than people thought he would.