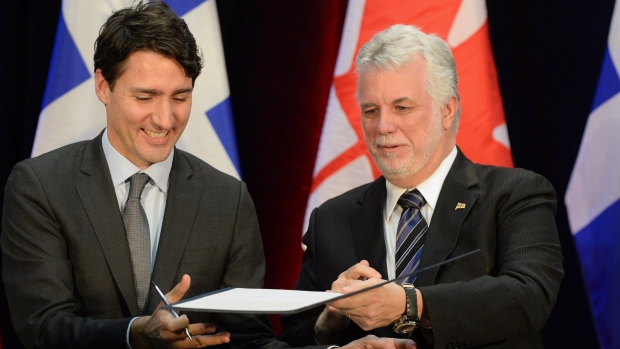 Prime Minister Justin Trudeau and the Premier of Quebec Philippe Couillard sign a infrastructure agreement in Montreal , The Canadian Press

MONTREAL -- Prime Minister Justin Trudeau says negotiations with Bombardier Inc. (BBDb.TO) are going well but he's not saying if the two sides are close to a deal.

He made the comments next to Quebec Premier Philippe Couillard today as the two attended an unrelated funding announcement in Montreal.

The prime minister said the conversations are positive and that the federal government is still trying to determine the best way to help the transportation giant, which wants US$1 billion from Ottawa.

Couillard added he is confident Ottawa will reach a deal with the Montreal-based company.

On Thursday, Bombardier said it is still looking for federal financial assistance despite forecasting strong earnings growth in 2017.