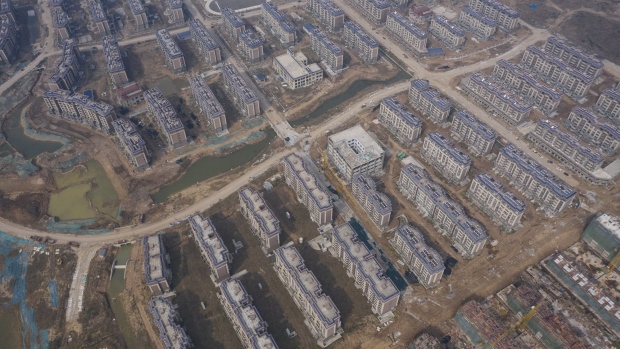 (Bloomberg) -- Attention is once again focusing on debt payments after a volatile week for Chinese property stocks and bonds.

Some developers are looking to repay debt early as they seek to reassure bondholders. Logan Group Co. this week offered to repay a $244 million 5.75% dollar bond due Jan. 3, while Zhenro Properties Group Ltd. also said it would redeem its 5.95% dollar notes ahead of schedule.

The CSI 300 Real Estate Index slumped as much as 2% on Thursday, resuming declines after a 2.7% rally the day earlier which was sparked by a report that lending to the property sector had recovered to normal levels in October. The gauge fell to an almost seven-year low this week.

In Hong Kong, Kaisa Group Holdings Ltd. plunged more than 10% after jumping 12% on Wednesday, while its bonds fell as much as 5 cents on the dollar, according to traders.

Evergrande’s automotive unit is nearing a sale of U.K. startup Protean Electric to e-mobility company Bedeo, people with knowledge of the matter said. The divestment by China Evergrande New Energy Vehicle Group Ltd. could be announced as soon as Thursday, according to the people, who asked not to be identified because the information is private. Evergrande bought Protean in 2019 for $58 million.

A China Evergrande financing company pledged mortgages it provided to about 100 flats in a Hong Kong residential project as collateral for a loan, HK01 reported. Apartment owners’ combined mortgages in the Evergrande project totaled as much as HK$400 million ($51 million), according to the report, which didn’t give the size of the loan Evergrande received. Some of the mortgages were pledged in June 2020, it said.

China’s stressed property developers may be strapped for cash but some of them are still projected to pay dividends for this year. Developer China Aoyuan has an estimated 12-month dividend yield of about 40%, among the highest ratios of the 739 members of the MSCI China Index, Bloomberg dividend forecasts show. The stock of another stressed real estate firm Guangzhou R&F Properties yields an expected 19%. Sunac yields 14%.

Junk-rated Chinese debt was one of the most profitable trades in global credit for nearly a decade. Now such bonds are sliding from boom to bust in spectacular fashion.

A developer-packed index of the country’s junk-rated dollar bonds has lost about 26% since the end of May, the steepest decline in a decade. New issuance from builders has dwindled to the lowest level in 18 months, and even some investment-grade property giants are facing sharply higher borrowing costs. High-profile Chinese bond funds managed by Fidelity and Value Partners are headed for record annual losses.