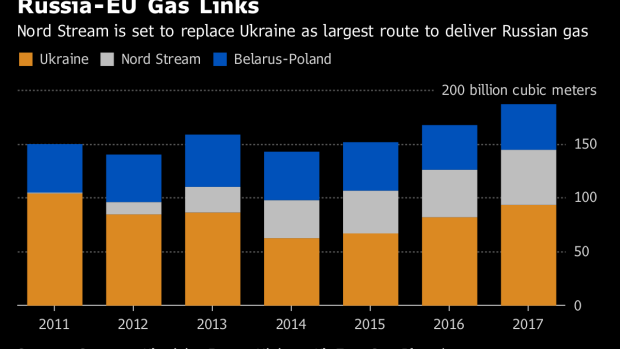 Sections of pipe sit on a raised platform at the landing site of Nord Stream 2 gas pipeline, operated by Gazprom PJSC, in Lubmin, Germany, on Tuesday, March 26, 2019. Germany is preparing one of its biggest sustained increases in natural gas consumption in almost two decades, regardless of U.S. admonitions that it shouldnt draw so much of its energy from Russia. Photographer: Krisztian Bocsi/Bloomberg , Bloomberg

(Bloomberg) -- The fate of the controversial Nord Stream 2 pipeline carrying Russian natural gas to Germany is likely to be decided in a courtroom.

The project will next week seek assurances from the European Union that it won’t become subject to the bloc’s revised gas market requirements, which would hurt the profitability of the pipeline. If they don’t get them, the group building the pipeline said it may take the matter to the courts.

The new rules begin on May 23 and offer a simple procedure to waive the obligations for already existing gas links, which the not-yet-completed NS2 may not qualify for. The European Commission is unlikely to bow to the pressure, according to three people with knowledge of the matter, who asked not to be identified, citing policy. The EU regulatory arm declined to comment.

“We’re being put at a different competitive footing compared to competing pipelines from other sources,” Sebastian Sass, Nord Stream 2’s EU representative, said in an interview. “We’re considering further legal means, such as appeals, depending on the content of the commission’s response.”

The planned second leg of the Nord Stream gas link has divided EU governments, with nations led by Poland concerned about the bloc’s increasing dependence on Russian gas and President Vladimir Putin’s meddling in Ukraine. The pipeline under the Baltic Sea would allow gas to bypass Ukraine as it flows to European users.

The 28-nation EU earlier this year struck a deal to tighten rules on third-nation natural gas imports into the trade bloc that includes a requirement to separate ownership of gas and transmission lines. While the new law applies to all new and existing pipelines, only completed links can obtain a fairly simple waiver. Those that are not yet operational have the possibility to seek exclusion from the law in a more complicated procedure that requires approval by the EU Commission.

The wording of the EU law and various interpretations of its provisions risk discrimination against individual investors, according to Nord Stream 2. The company sent a letter last month to Commission President Jean-Claude Juncker asking for confirmation that its investments made before the entry into force of the new rules will be protected to the same extent as those of other companies. The EU’s regulatory arm has until May 13 to reply.

“I understand there’s a political discussion over how much Nord Stream 2 is desirable or not, and there legitimately you can have many different opinions, but then there are boundaries set by legal principles, like the non-discrimination principle,” Sass said. “The point of this derogation provision is to protect legitimate expectations of investors. That has nothing to do with whether the project has been already constructed or not.”

The part of the pipeline in German territorial waters has been finished and construction of the link remains on track, Nord Stream 2 said. It maintains plans to become operational by end-2019 even in the face of regulatory hurdles in Denmark, which asked the link’s promoters to study a different route.

Nord Stream 2 argues a new pipeline is needed to guarantee supplies will continue to flow in the coming decades as EU domestic reserves shrink and import needs rise. Opponents of the project say it hurts the bloc’s cohesion and weakens its Energy Union strategy aimed at integrating the region’s gas and power markets, diversifying energy supplies and improving security.

The U.S., seeking to tap into the European LNG market, has joined the choir of critics.

Uniper SE, Engie SA, Royal Dutch Shell Plc, OMV AG and BASF SE’s Wintershall are European partners of Russian pipeline gas export monopoly Gazprom PJSC in financing the project to expand Nord Stream by 55 billion cubic meters a year. Russia supplies a third of Europe’s gas and has no plans to give up its share to the expanding list of competitors from Norway to the U.S.

To contact the editors responsible for this story: Reed Landberg at landberg@bloomberg.net, Rob Verdonck, Andrew Reierson