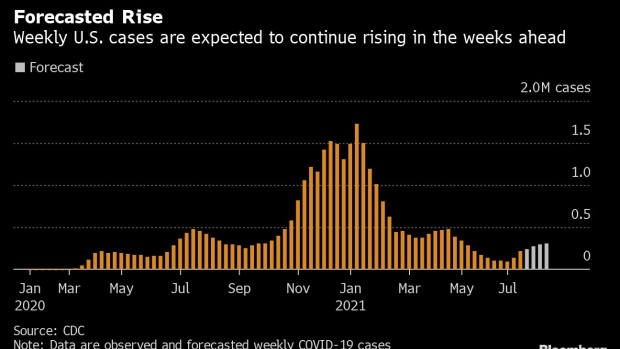 Visitors ride the ferris wheel at an amusement park in Branson, Missouri, U.S., on Tuesday, June 29, 2021. President Biden set a goal for 70% of American adults to get at least one Covid-19 shot by July 4. Despite ample vaccine supplies he missed that target, largely because the government has struggled to give away shots in rural, deeply conservative regions that are bastions of support for his predecessor. Photographer: Liz Sanders/Bloomberg , Bloomberg

(Bloomberg) -- The recent rise in Covid-19 cases shows no signs of abating in the U.S. states that have fueled the uptick as the delta variant proliferates.

Nationally, cases are likely to rise to 306,909 for the week ending Aug. 14, up 39% from last week, according to an ensemble of forecasts from the Centers for Disease Control and Prevention.

Surges are expected in some states where case rates are among the worst. Florida rates are seen climbing to 62,744 cases per week, more than half the state’s winter peak. The trend looks similar in Missouri, where the governor this week announced a new vaccine incentive program.

The numbers reflect a concerning next chapter in the pandemic, one in which more transmissible variant cases spread through unvaccinated sections of the U.S. Testing and mask use are on the decline, and those infected skew younger.

Over 600,000 U.S. residents have died. The University of Washington’s Institute for Health Metrics and Evaluation estimates 50,000 deaths between July 12 and Nov. 1, bringing the estimated total to about 653,000. The group still isn’t forecasting “exponential surges” like those seen in the U.K., due to higher rates of prior infection and higher inoculation with the more effective mRNA vaccines, according to a July 14 briefing.

Hospitalizations are climbing from some of the pandemic’s lowest levels, though still far from January peaks, as older people and the most vulnerable are better protected. For the week ended July 19, the U.S. reported an average 3,521 hospital admissions, a 32% increase from the week prior.