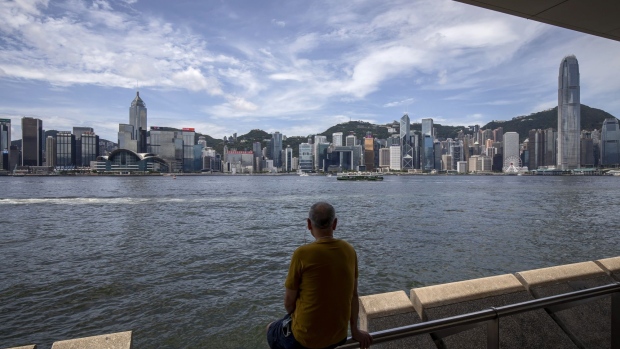 A man sits by the Tsim Sha Tsui waterfront as buildings forming the city skyline stand across the harbor in Hong Kong, China, on Monday, June 29, 2020. The national security law that China could impose on Hong Kong as early as this week won't need to be used if the financial hub's residents avoid crossing certain "red lines," according to Bernard Chan, a top adviser to Hong Kong Chief Executive Carrie Lam. Photographer: Paul Yeung/Bloomberg , Bloomberg

In Hong Kong –- the world’s most unaffordable housing market -- rents are staying exorbitantly high despite the global pandemic and a severe recession, threatening to add a new source of discontent after months of political turmoil.

Hong Kong’s economy is forecast to shrink as much as 8 per cent this year and its unemployment rate is near a 15-year high at around 6 per cent. Yet, home rents remain one of the world’s most expensive while pulling back about 9.2 per cent in August from the previous year.

High rents combined with the surge in joblessness are making it harder for blue-collar workers and those on the fringes of poverty to find and hold on to even meager living spaces. Housing inequality has long been a hot-button issue in Hong Kong, where tens of thousands live in tiny subdivided flats that are sometimes so small they’re called cage-homes. The added housing difficulties fueled by the pandemic put further pressure on the administration of Chief Executive Carrie Lam, which is struggling to regain the trust of millions after the imposition of a national security law that’s tightened Beijing’s grip on the city. 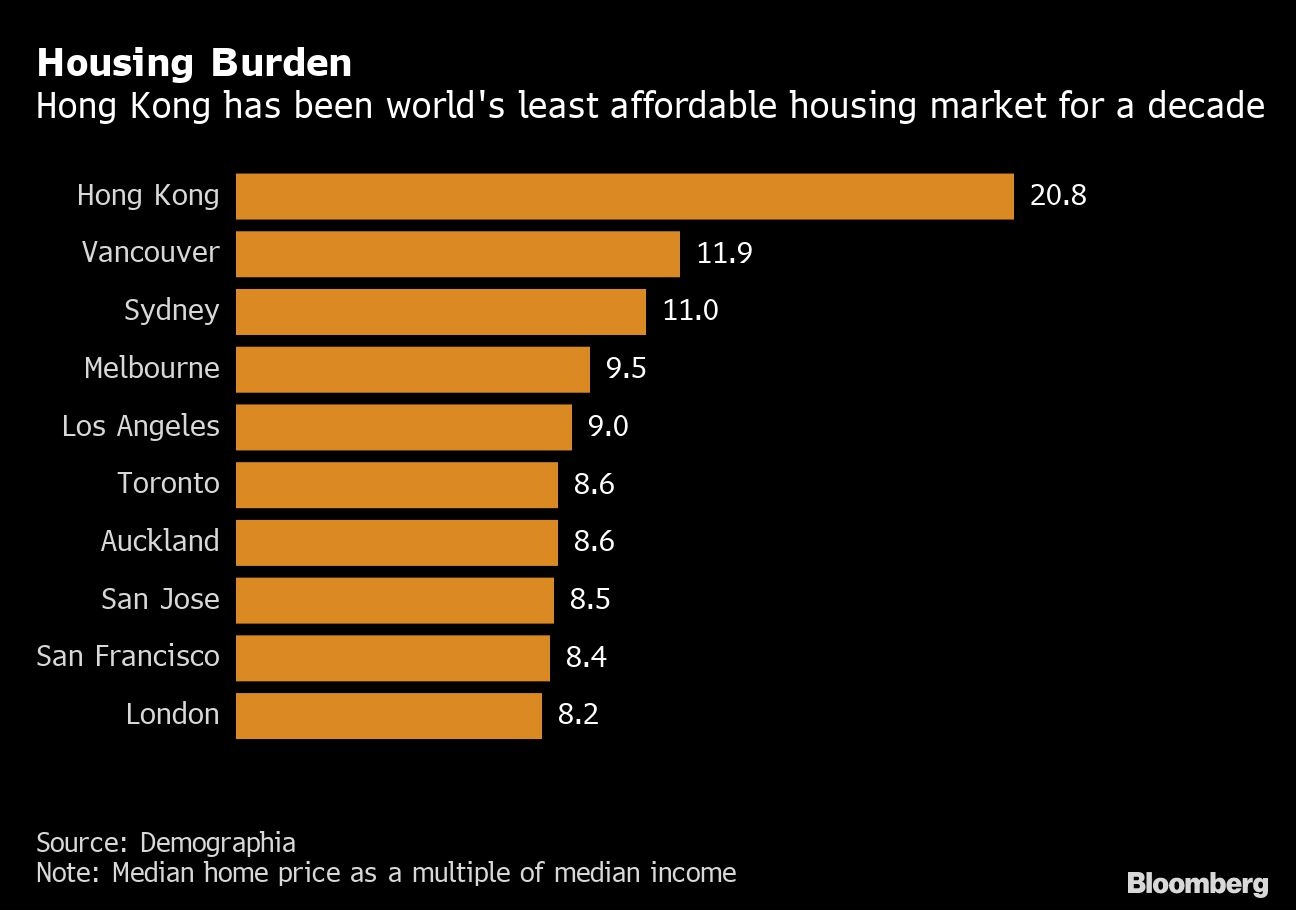 In the Tsim Sha Tsui district, home to luxury boutiques and glittering high rises, Herman Wong offers a look how the pandemic has fueled a deterioration in living conditions for many. The 55-year-old resident lost his job at a vegetable delivery company last year when the political protests disrupted business and he’s struggled to find a new one during the pandemic. He had been commuting from a one-bedroom apartment in Shenzhen, the nearby Chinese city, rented for 4,200 yuan (US$620) a month, but got kicked out in April and ended up back in Hong Kong -- on the streets.

A non-profit helped him apply for a government subsidy and he now shares a 60-square-foot hostel room for HK$5,000 (US$645) a month. It fits two beds in a space that’s half the size of a car park and the windows must remain shut because of rats and smells. Yet, Wong fears even that might soon become unaffordable.

“We could only afford the room because tourism is down due to the pandemic,” said Wong. “I’m afraid that I’ll have to find somewhere else to live if rents go up.” He feels the government isn’t doing enough for people in his situation, who he says are “being abandoned.”

A Hong Kong government representative said its departments are doing their best to support street sleepers through non-governmental organizations, hostel rooms and provisions for other necessities like haircuts, meals and bathing. The social welfare department has also added measures to broaden assistance to the unemployed during the pandemic, the government said.

In a mid-year study, real-estate services provider CBRE Group reported that Hong Kong remains the world’s most expensive place to buy a property. Monthly average rents in the city stayed the world’s third highest after New York and Abu Dhabi.

Hong Kong’s rents were estimated by CBRE to be 7 per cent below New York’s last year, but they are more unaffordable because Hong Kong’s median income is just 35 per cent that of New York’s. Abu Dhabi ranks high because of expats who pay high rents for large homes, although locals benefit from government subsidized housing.

In Hong Kong, the number of “street sleepers” approached by non-government organizations rose to 1,423 during the period April 2019 to March 2020, from 1,297 in the previous year, according to a spokesman for Social Welfare Department. While that reflects the number helped by the nonprofits, it doesn’t count all of those without homes in Hong Kong.

Although the city’s homeless population appears small compared with New York or San Francisco, it doesn’t reflect those living in “inhumane” spaces that aren’t safe, said Jeff Rotmeyer, founder of ImpactHK, a non-government organization that provides shelter and meals to those without homes.

“The truth is you have hundreds of thousands of people living in spaces that are less than 100 square feet, coffin homes, caged homes, sub-divided apartments,” said Rotmeyer. The situation seems to have become worse during the pandemic and he sees new faces almost every day when he does his outreach walks, including those of younger people, who gather on rooftops, tunnels and footbridges because they don’t have living space, he said.

Hong Kong’s government is also seen to be doing less to help protect renters compared to other big cities. In the U.S., the Centers for Disease Control and Prevention have temporarily halted residential evictions to prevent the spread of COVID-19, while in London, the mayor has called for a two-year rent freeze in the capital.

Hong Kong’s homeless situation has worsened during the coronavirus pandemic as low-wage workers from cleaners to restaurant staff have lost jobs, according to Ng Wai Tung, community organizer at Society for Community Organization.

While there have been subsidies given to businesses, less has been done for the homeless, many of whom face a waiting list for hostels and rising hostel rents, he said. “They feel helpless and hopeless.” The utilization rate of subvented hostel places is about 80 per cent, according to the government representative.

A study by Society for Community Organization found that 36.5 per cent of 104 respondents said they started to become homeless this year.

Living conditions for some of those already homeless in Hong Kong have also worsened. Some who had been camping out at McDonald’s, or so called “McRefugees,” lost that place of refuge as social distancing rules limited the hours of food outlets. That’s pushed many out on the streets.

For the past three years, Leung Hip-kuen, who is jobless, spent most of his nights in a 24-hour McDonald’s in Sham Shui Po, one of Hong Kong’s poorest districts. However, since restrictions on dining at night were imposed in mid July, he has been sleeping on the bench of a nearby hospital which has a clean bathroom and good ventilation. Twenty-four-hour McDonald’s outlets are only available for dine-in until midnight, and don’t allow customers to sit in the restaurant after that until the early morning, so Leung can’t sleep there.

Leung, 38, has chronic health problems and is relying on a government handout of around HK$6,000 a month for the disabled while waiting to be assigned a public housing unit. For now, he rents a 40-square-foot unit, which barely fits a person, for HK$1,900 a month. He mainly uses it to to store his things.

“The air circulation is horrible. There is no ventilator, fan or window. The power socket can get heated within five minutes of using,” said Leung. “So I’d rather go to sleep on the streets.” Others left unemployed by the pandemic worry they could end up in a similar situation soon.

Fung, a 50-year-old former restaurant waitress who only gave her last name because she didn’t want her relatives and friends to recognize her, has been jobless for a few months after the Chinese restaurant she worked for closed because of the pandemic. She said she’s renting a 90-square-foot subdivided flat in Tsuen Wan for around HK$4,000 a month.

But she may not be able to continue living in the apartment as she’s running out of savings without a job. “Life is miserable if you don’t own a home,” she said. “Jobs are hard to get and rents are so expensive.”