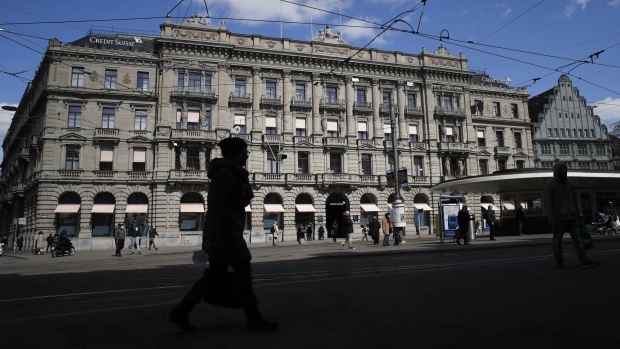 The Credit Suisse Group AG headquarters in Zurich, Switzerland, on Thursday, April 8, 2021. Credit Suisse Chief Executive Officer Thomas Gottstein gathered dozens of managing directors at the global bank on a conference call late Tuesday, as part of crisis-management efforts after the lender announced that it stands to lose as much as $4.7 billion amid the meltdown of hedge fund Archegos Capital Management. Photographer: Stefan Wermuth/Bloomberg , Bloomberg

(Bloomberg) -- Credit Suisse Group AG said it reached a settlement with its former wealth-management executive Iqbal Khan and a private detective firm, calling to a close a spying scandal that rocked one of Europe’s biggest lenders and ultimately led to the ouster of its chief executive officer Tidjane Thiam last year.

“All involved parties have agreed to settle, and this matter is now closed,” a spokesperson for the bank said on Sunday, confirming that it had reached a settlement with Khan, his wife and the private detective firm Investigo. No further details were disclosed. A probe by Swiss financial regulator, Finma, over the company’s surveillance activities is ongoing.

In 2019, Credit Suisse hired a private investigator to spy on Khan, once seen as a potential successor to the CEO before defecting to rival UBS Group AG. The incident culminated in a physical confrontation in downtown Zurich between Khan and the men who followed him, shaking Switzerland’s financial world and setting off investigations by Zurich’s prosecutor and the company’s board of directors.

The settlement would close a chapter for Credit Suisse as it seeks to move past a string of recent scandals. It faces an exodus of senior bankers after the collapse of Archegos Capital Management and Greensill Capital. In the aftermath, new chairman Antonio Horta-Osorio pledged a review of the bank’s businesses.

Credit Suisse is set to report its second-quarter earnings on July 29. The settlement was first reported by Swiss newspaper NZZ am Sonntag.