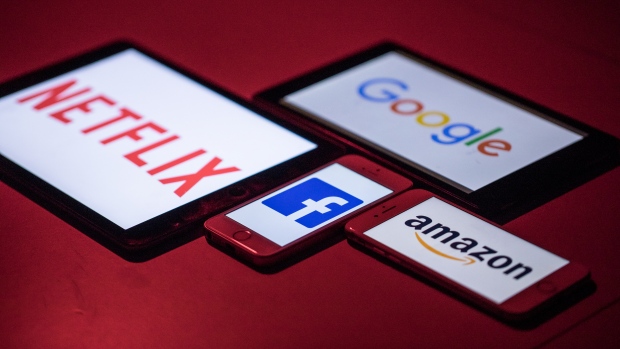 The logos for Facebook Inc., Amazon.com Inc., Netflix Inc. and Google, a unit of Alphabet Inc., sit on smartphone and tablet devices in this arranged photograph in London, U.K, Aug. 20, 2018 , Bloomberg/Jason Alden

U.S. technology stocks are the world’s most crowded trade, say fund managers overseeing US$601 billion, fueling fears about a bubble that could burst the market rally.

Investors surveyed by Bank of America Corp. have never been so unanimous in their conviction on the most popular asset class, with 80 per cent of participants citing long U.S. tech, up from 59 per cent in August. Among the market’s biggest tail risks, concerns about a tech bubble jumped to be ranked behind only a resurgence in COVID-19.

BofA’s global survey, conducted in the week through Sept. 10, offers insight into investor thinking a week after the Nasdaq 100’s sharp selloff forced market participants to doubt whether the rally in U.S. tech giants can keep going. The gains in U.S. equities over the past six months have to a large extent been led by a group of megacap tech and internet stocks known as the Faangs, which have prospered as lockdowns drove demand for online services.

Strategists led by Michael Hartnett said fund managers signaled that they are “paranoid tech” and have been decreasing their allocation to the sector in favor of more cyclical equities, such as cheaper value shares, small-caps and industrials. At the same time, they don’t see a regional rotation as investors boosted their overweight in U.S. equities and slashed exposure to euro-area and emerging-market stocks.

Fund managers are feeling more confident about the economy, with 49 per cent of respondents saying a global recovery is in an early cycle phase compared with 37 per cent who believe the world is in a recession. Also, investors haven’t been this optimistic on corporate earnings growth since 2011, with 47 per cent betting profits will rise 10 per cent or more over the next 12 months. 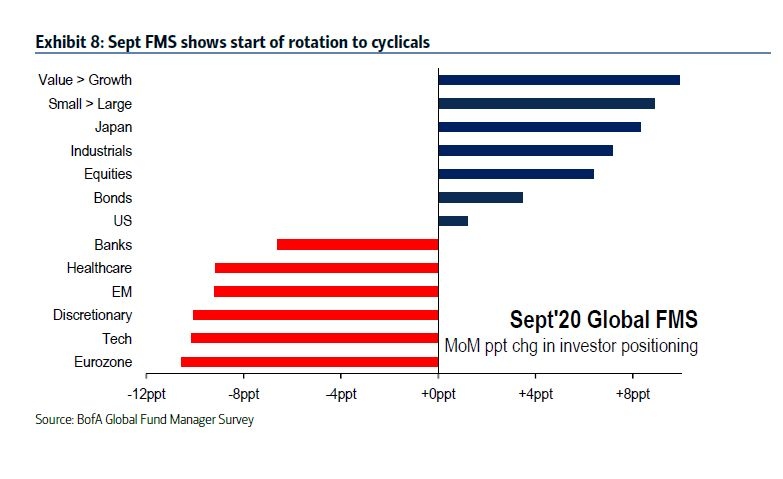 A COVID-19 vaccine remains in focus, with 39 per cent of surveyed fund managers expecting it in the first quarter of next year and 32 per cent betting on the fourth quarter of 2020. It’s also seen as the top possible trigger for higher rates, followed by inflation.