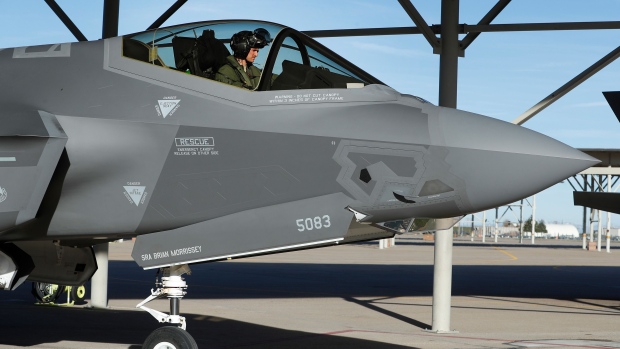 OGDEN, UT - MARCH 15: A pilot sits in the cockpit of an F-35 fighter jet preparing for a training mission at Hill Air Force Base on March 15, 2017 in Ogden, Utah. Hill is the first Air Force base to get combat ready F-35's. They currently have 17 that might be deployed in the fight against terrorism and ISIS in the near future. (Photo by George Frey/Getty Images) , Photographer: George Frey/Getty Images North America

(Bloomberg) -- Cost overruns on a project to upgrade Lockheed Martin Corp.’s F-35 cockpit computer have risen another $236 million, nearly doubling the size of the original $712 million contract, US officials said.

The F-35 Joint Program Office said cost overruns on the project now total $680 million and that delivery of the first jet with the upgraded hardware and software would be pushed back several months from the planned completion date of July 2023. The original contract, from 2018, was valued at $712 million.

The Pentagon and Lockheed Martin “took on the challenge and risk of a lower than expected contract value” but the “unexpected risk has been realized,” the office said in written answers to Bloomberg News. “The team remains committed to a 2023 delivery.”

US taxpayers and allied nations that own the jet will absorb the cost of the overrun under the terms of the cost-plus development contract.

Lockheed Martin continues “to work aggressively” with the Pentagon and subcontractors to deliver the top upgrade known formally as “Technology Refresh 3,” or TR-3, the Bethesda, Maryland-based company said in a statement.

“What you are looking at is consistent with what we have seen,” said Jon Ludwigson, lead analyst on the Government Accountability Office’s annual F-35 program review. “We are tracking the issue for inclusion in our report to be issued early next year.”

The overrun is tiny compared to the overall cost of the F-35 program, which edged up last year to $412 billion from $398 billion, according to a Defense Department report in September. The F-35’s expected cost was $233 billion when Lockheed Martin won the contract in 2001 to develop and build the fleet.

The additional costs and delay mar what’s been a largely positive year for the world’s largest weapons program. Global interest has soared because of Russia’s invasion of Ukraine. International orders for the F-35 continue to rise, with Finland, Switzerland, Germany and Greece the latest overseas customers.

South Korea has indicated it wants more of the jets. More than 875 F-35s have been delivered worldwide out of a potential fleet of more than 3,300 for the US and partner nations.

House and Senate defense appropriators are mulling whether to add as much as $1.4 billion in funding for the F-35 as part of the proposed fiscal 2023 defense bill after the Pentagon found it’s short that amount for the next major F-35 three-year mega-contract.

The TR-3 “has made significant progress recently,” demonstrating in ground testing that it’s safe to fly, said the program office. The upgrade’s on track to start development flight testing — a major milestone — at Edwards Air Force Base in California within two weeks, it said.

The cost overrun was driven mostly by “unexpected challenges” with the TR-3 Integrated Core Processor’s software development, component and system integration and system qualification testing, which had ripple effects, the program office said. “The team continues to work aggressively seven days a week” to shorten the projected delivery delay and “they are producing results at impressive speed,” it said.

The F-35 is essentially a flying computer, with more than 8 million lines of code. The TR-3 software and hardware provide the computational horsepower for fielding an upgrade known as “Block 4” that increases processing power 37 times and memory 20 times over the F-35’s current capability.

The jet’s current hardware and software relies on “10-year-old processing and memory and cannot unlock the new capabilities needed,” the program office said.