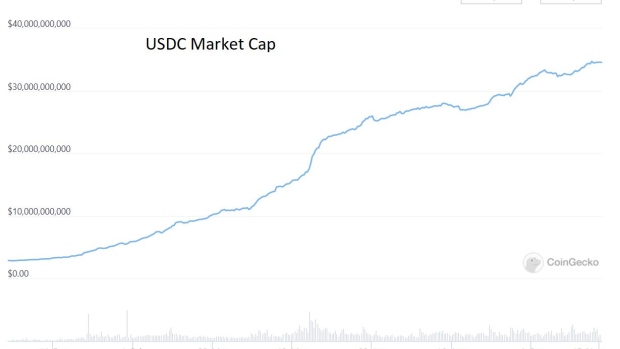 (Bloomberg) -- Circle, the principal operator of the second-biggest stablecoin, sees potential growth with corporate balance sheets as it broadens its geographic footprint and product offerings.

The Boston-based internet finance firm is establishing a regional headquarters in Singapore and has announced it’s investing in a Japanese yen stablecoin effort through the newly-established Circle Ventures. Circle sees ample opportunity in Asian markets, Chief Executive Officer Jeremy Allaire said in an interview. He expects significant growth in the use of stablecoins, the top two of which are Circle’s USDC and category leader Tether, in borrowing and lending markets.

“Especially in the inflation environment we’re in and the search for yield, this is going to be a big, big theme,” Allaire said via a video call. “While a lot of people want to focus on people hedging by buying Bitcoin directly, we think for stewards of capital within corporations and corporate treasurers and so on, that an allocation into stablecoin yield is actually going to be really, really attractive.” The company is rolling out its interest-yielding product, Circle Yield, more broadly and making it a strategic focus.

Stablecoins are growing quickly along with the broader cryptocurrency space -- USDC’s market value is now about $35 billion, compared with $3.7 billion at the end of last year. This rapid expansion paired with the premise of stablecoins typically being pegged to a fiat currency like the U.S. dollar have also attracted the attention of regulators.

The U.S. Securities and Exchange Commission is getting a pathway to rein in stablecoins and the international Financial Stability Board issued a report last month on oversight of the assets. Regulators, particularly in the U.S., have also expressed concern about crypto yield products. Circle has disclosed that it received a subpoena from the SEC in July.

Coinbase, Circle Say USDC Reserves to Be In Cash, Treasuries

Other things Allaire said in the interview: