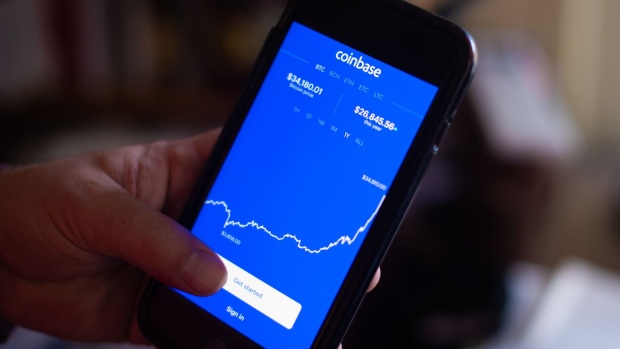 (Bloomberg) -- Add Coinbase Inc. to the ranks of cryptocurrency firms looking to write their own regulation before Washington does.

The largest U.S.-based crypto exchange released a policy proposal on Thursday calling for the U.S. government to put a new regulator in charge of digital assets and to create a new set of crypto-specific rules, instead of applying decades-old law that governs the rest of the financial system.

“It didn’t make sense to take a legacy regulation and somehow transform it into an agency that would be able to look at these markets anew,” Faryar Shirzad, Coinbase’s chief policy officer, said at a briefing with journalists.

Coinbase’s proposal joins a blizzard of papers from the crypto industry laying out broad principles for regulation they believe Congress and the administration should adopt as Washington seeks greater oversight and control of the largely unpoliced market, now more than $2 trillion and growing. Crypto companies, investors and associations including venture capital firm Andreessen Horowitz, pro-crypto think tank Coin Center and trade groups including the Blockchain Association have all weighed in.

The ideas have ranged from drafting crypto-specific rules to setting standards through a self-regulatory body to creating a so-called safe harbor for new crypto projects that would allow them to launch and grow for a few years before potentially registering with the Securities and Exchange Commission, a time-consuming and costly process. A common industry refrain is dissatisfaction with the application of existing rules around securities and banking regulation to crypto firms, as well as a lack of clarity on when those rules apply.

Until now, “the industry has been playing a reactionary role,” said Michelle Bond, who heads the Association for Digital Asset Markets, a self-governing association. “That needs to change.”

Coinbase’s Shirzad said the company is trying to brief regulators on their proposal and that it didn’t expect its suggestions would be implemented rapidly. At the same time, the company in its proposal said existing regulations risk stifling the crypto industry, which has grown in about 12 years to become a multitrillion-dollar market.

The onslaught comes as the White House considers launching a broad initiative to review and coordinate crypto policy across President Joe Biden’s administration. Bloomberg News on Friday reported that the administration is considering an executive order to direct agencies to study various aspects of crypto policy and has mulled appointing a crypto “czar.”

Coinbase and other crypto firms have bristled at the SEC’s application of decades-old securities rules to the crypto industry, and the firm recently abandoned a plan to offer interest-bearing accounts after it said the agency threatened to sue.

Treasury Is Pushing to Impose Bank-Like Rules on Stablecoins

State and federal investigators have already pursued actions against many other firms. States including Texas, Alabama and New Jersey in the past few months have issued or threatened to issue cease and desist orders against cryptocurrency lenders that offer interest-bearing accounts.

Some crypto associations think the White House initiative, if it moves forward, will give firms an opening to help mold new regulations for the industry.

Groups such as Andreessen Horowitz have proposed creating or studying the creation of a so-called self-regulatory organization that would be under the auspices of federal agencies but police some standards for crypto firms itself, akin to other such organizations that exist for other Wall Street firms. Executives from Andreessen Horowitz plan to meet lawmakers and administration officials this week to discuss their proposals, the company said.

Organizations have also said they need clarity on how crypto should be taxed and for guidance on what rules broker-dealers must follow if they want to hold cryptocurrencies for clients. Some groups say that crypto companies, which often have to seek separate licenses to do business in each state, need a national licensing regime.

“We’re starting to see a much more active political mentality within the crypto community,” said Kristin Smith, who heads the Blockchain Association, noting that many crypto companies in the past few months have opened their first offices in Washington and hired lobbyists for the first time. “The industry is doing all the types of things we need to have the expertise and people in place.”

Many of the crypto industry’s proposals came in response to a request from Senate Banking Ranking Republican Patrick Toomey of Pennsylvania, who is in the preliminary stages of crafting crypto legislation. It’s not yet clear how receptive policy makers will be. Smith said comprehensive crypto legislation could take years to move forward even with bipartisan support.

Past meetings with the administration have also left some in the industry wary that their feedback matters. The Treasury Department is considering new rules for so-called stablecoins that it could release later this month. Though the department in September met with stablecoin providers to get feedback, some executives of companies that attended were left with the impression that the recommendations were already mostly complete and that the meeting was just for show, said people familiar with the matter.

In the meantime, some federal officials have said they already think the rules are clear for crypto firms. Gensler at least week’s hearing said he thinks the law “painted with a broad brush the definition of a security,” giving his agency a wide berth to regulate the tokens.

“We see an executive order as more of Biden’s seal of approval than a change in where policy is headed,” said Cowen analyst Jaret Seiberg in a research note on Monday. While the initiative might prevent agencies from proposing conflicting rules, it won’t change the overall direction. “Regulation is coming,” he said.