The week’s rout in cryptocurrencies deepened, with Bitcoin tumbling to the lowest levels in two years, as Binance is seen increasingly unlikely to follow through on its takeover of FTX.com.

Bitcoin, the largest token by market value, fell as much as 11 per cent to US$16,705 on Wednesday, the least since November 2020. That brings this week decline to about 20 per cent. It reached a record high of almost US$69,000 a year ago. Just about every digital coin was struggling: Ether, Solana, Polkadot and Avalanche all dropped.

FTT, the utility token of the FTX exchange, collapsed by more than 40 per cent, following a more-than-70 per cent tumble on Tuesday.

“The market is now in full fear mode,” said Ilan​ Solot, co‑head of digital assets at Marex Solutions. “Because Pandora’s box has been opened with this Binance-FTX deal and now everyone’s looking to see if there’s more dominoes and what else needs to be liquidated.” 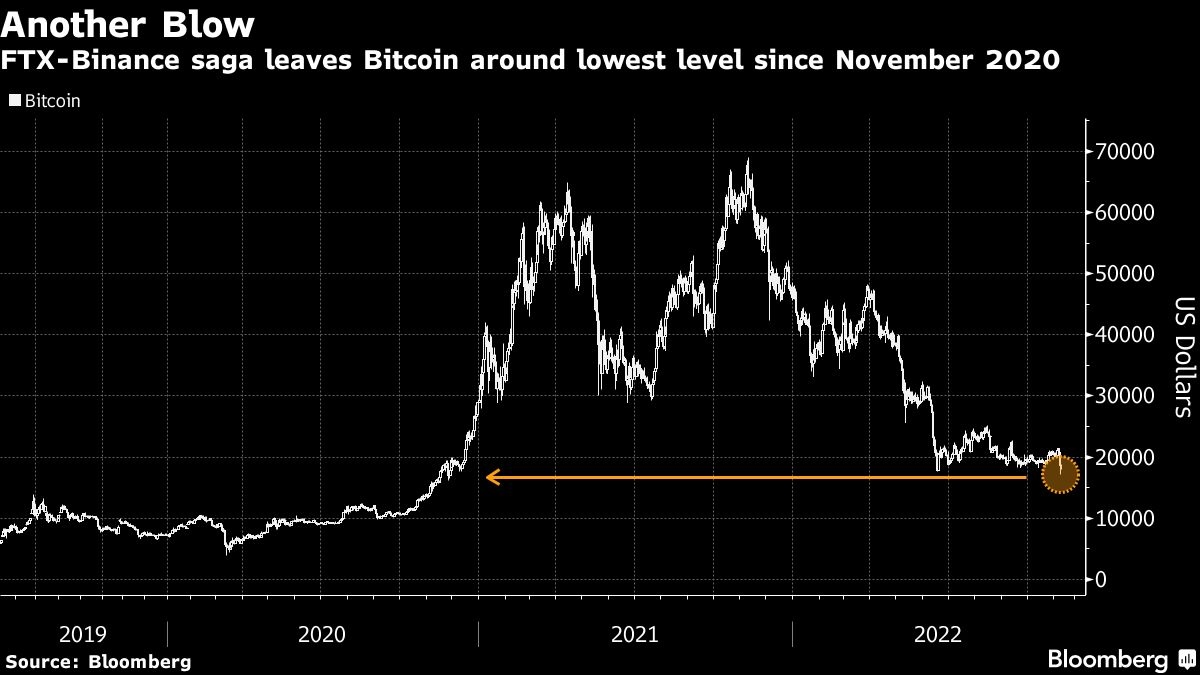 At issue is Binance executives finding through due diligence that the gap between liabilities and assets at FTX is likely in the billions, and possibly more than US$6 billion, said a person familiar with the matter, who wasn’t authorized to publicly discuss the matter. Binance Chief Executive Officer Changpeng “CZ” Zhao had stunned the crypto world on Tuesday with an announcement that his firm was moving to take over FTX.com, which suffered a liquidity crunch after Zhao announced that he was selling a US$530 million holding of FTX’s native token.

Investors are on edge about spreading contagion given the pivotal role FTX and its co-founder Sam Bankman-Fried played in the industry.

“Since I entered the crypto industry in 2016, very few periods tested its market infrastructure and participants like the last 24 hours did,” said crypto hedge-fund manager Dan Liebau of Modular Asset Management.

Noelle Acheson, author of the “Crypto is Macro Now” newsletter, pointed out that Bitcoin, which typically holds up better than other tokens during times of stress, was seeing greater declines than some other altcoins. That potentially points to institutional investors bailing “as a result of the drama.”

“It’s a sign that this is a blow to confidence in the industry as a whole, from the investor’s point of view,” she said in an interview. “From the industry’s point of view, it’s also a pretty steep blow, much more so than what we saw with Three Arrows Capital and with the Terra implosion. This is sitting harder.”

The sense of dread that swept across clients of fallen crypto exchange FTX.com was so intense that they pulled out US$430 million worth of Bitcoin in the space of just four days. FTX had more than 20,000 Bitcoins going into Sunday, according to data from CryptoQuant. That fell to almost zero by Wednesday after fears about FTX.com’s financial health led customers to flee.

FTT, the utility token of the FTX exchange, has collapsed by more than 75 per cent in the past 24 hours and was trading around US$4.20, according to CoinGecko data.

“The letter of intent is non-binding, which means that further issues could still arise if CZ/Binance decide to back out of the deal,” said David Moreno Darocas, research associate at CryptoCompare.

The letter of acquisition intent by Zhao’s Binance Holdings came after a bitter feud between with Bankman-Fried spilled into the open. Zhao actively undermined confidence in FTX’s finances, helping spark an exodus of users from the three-year-old FTX.com exchange.

A day before reaching a deal, Bankman-Fried said on Twitter that assets on FTX were “fine.”

Terms of the emergency buyout were scant, with Binance saying the agreement came after “a significant liquidity crunch” befell FTX and the firm asked for its help.

The price of Sol, the native token of the Solana blockchain -- which is associated with both FTX and Bankman-Fried’s crypto trading house Alameda Research -- posted dramatic declines alongside other tokens of Solana-based projects. Sol was down as much as 36 per cent on Wednesday, taking losses this year to 90 per cent.

“SBF and FTX were the biggest patrons of Solana,” Teng Yan, a researcher at digital-asset research firm Delphi Digital, said on Twitter. “This era is over. Binance has taken over, and they will heavily favor BNB chain over Solana. Alameda had ~US$1B in locked and unlocked US$SOL, which they’ll have to sell if insolvent. This puts a huge sell pressure on US$SOL.”

The FTX-Binance ordeal gave some traders flashbacks to the issues suffered by Celsius -- the crypto lender that collapsed earlier this year -- as well as those seen by other firms that were engulfed in this year’s crash in digital assets.

Teong Hng, CEO at crypto investment firm Satori Research, said the “situation is still very fluid” while adding “I am confident these two crypto giants will do the right thing to protect investors and the industry.”