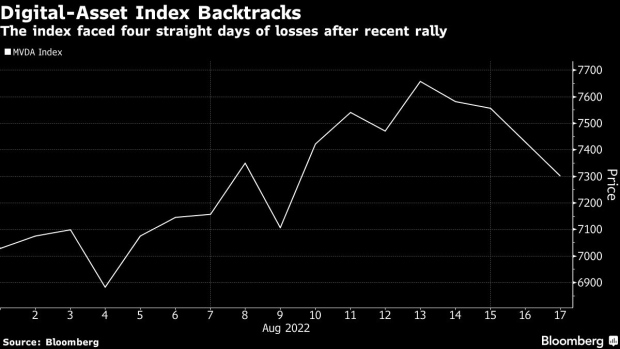 (Bloomberg) -- Cryptocurrencies fell again on Wednesday, with Bitcoin and Ether both retreating for the fourth consecutive day.

The MVDA Index, which tracks the 100 largest digital assets, tumbled close to 1.6% in the trading session. Bitcoin, the largest cryptocurrency by market capitalization, fell more than 2% from Tuesday’s close as of 1:54 p.m. in New York, while Ether suffered similar declines.

Ether, having benefited in recent weeks from investor optimism as a long-awaited software update (known as the Merge) looks to occur mid-September, is struggling to keep the momentum as detractors look to fork the chain away from the update. This conflict in the Merge has led to uncertainty, but has also developed new trading strategies.

“Institutions have been asking us about the Merge, along with the technicalities and probabilities associated with it for several months now,” Kroger said. He added that he’s also seen some players take profit from the recent rally instead of holding the asset, which might be the cause of the recent drop.

In a note, analysts at Genesis, one of the largest lenders in the digital assets world, said they saw consensus with a specific strategy where traders would hold Ether on chain, hedge with Ether futures and borrow Ether during the transition. Chain analysis company Glassnode’s analysts said that there appears to be “relatively sophisticated market positioning” related to the Merge where institutional capital is being used in the futures and options markets.

From a more macro perspective, Genesis analysts said there are “few obvious catalysts” for price action this month for the cryptosphere, with the late-August Federal Reserve Jackson Hole symposium as the main event.

“Choppier, discontinuous price returns may persist, keeping a floor under vols from current levels,” Genesis analysts wrote in the note.

The crypto markets have shown a recent uptick in regulatory scrutiny. The US Treasury Department sanctioned crypto mixer Tornado Cash -- a tool allowing users to mask their transaction. Investors also took note of the Federal Reserve’s warning through its supervisory letter recommending that lenders overseen by the Fed should notify the regulator prior to engaging in crypto-related activities and ensure that they comply with rules.