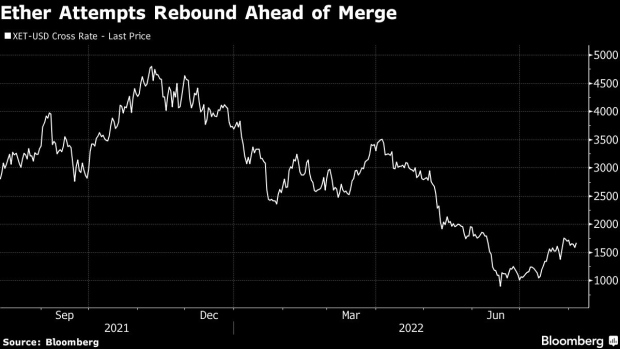 (Bloomberg) -- A monkey wrench is about to be thrown into the already complicated transition that the Ethereum blockchain is slated to go through soon.

In as early as September, Ethereum is expected to undergo a major software upgrade dubbed the Merge, in which the network will shift from using the scores of computers commonly referred to as miners to more energy-efficient validators to order transactions. Not everyone is going along with the change. A growing number of factions are making plans for forks that will copy the current software and, with a few tweaks, continue to essentially run the old version of Ethereum using miners.

One effort, called EthereumPOW, is spearheaded by Hongcai “Chandler” Guo, who used to be a large Ethereum miner in China but is now semi-retired and living near San Francisco. Several Chinese companies manufacturing Ethereum mining equipment -- which will be made nearly obsolete by the Merge -- have asked him to start the forking effort, he said.

“Everybody will get free money” when existing Ethereum holders receive new tokens if the blockchain is forked, Guo said in an interview. “Everybody will be happy.”

Forks have been a mainstay of the cryptocurrency world almost since the debut of Bitcoin more than a decade ago, as factions fought over the direction and control of various blockchains. Bitcoin Cash, Bitcoin Gold, and Bitcoin SV have all been spun off to varying degrees of success. There is already Ethereum Classic, which forked from Ethereum in 2016.

Analysts see plenty of hurdles. Newly forked chains often lack support from app developers, promoters and users, and in many cases don’t even have explorer tools that track their usage or lack thereof.

“Most discussions around a PoW Ethereum fork have been relatively short-sighted in scope,” focused on a new token, said Aidan Mott, intel manager at researcher Messari. “However, meaningful planning and research into supporting the ongoing logistics of a new network have been very light.”

“I don’t expect Ethereum to really be significantly harmed by another fork,” Buterin said in a webinar on Saturday. “In general my impression from pretty much everyone I talk to in Ethereum ecosystem, they have been completely supportive of the proof-of-stake effort and the ecosystem has been quite united around it.”

Still, Guo said he has a team of 60 developers working on a fork, which would require tweaks to the existing software to get rid of the ominous-sounding difficulty bomb, a software feature designed to force the transition to the new validator-based system called proof-of- stake (PoS) from the current proof-of-work (PoW).

How to proceed appears to be in dispute. Hedge fund Galois Capital has been predicting a fork, though Guo said they haven’t communicated. Crypto entrepreneur Justin Sun’s Poloniex exchange will support all forked proof-of-work Ethereum tokens, Sun said in a message to Bloomberg. Sun has created his own blockchain, Tron, which already uses proof-of-stake.

“Proof-of-work is essential to Ethereum,” since it’s very reliable, Sun said. “For PoS smart platform, we have Tron.”

Miners may simply end up supporting a fork as a way to keep going. After the Merge, they face the choice of migrating to supporting smaller chains like Ethereum Classic, repurposing gear or even selling their machines. Hive Blockchain Technologies Ltd. said Friday it would consider switching to mining Ethereum Classic.

“We generally support anything that pays us well, that we can get behind,” said Chris Kyle, of Flexpool, which helps many small miners to support Ethereum. While he notes he hasn’t seen any strong proposals yet, that doesn’t mean a fork won’t take off, he said.

“One thing I will note is that crypto tends to be pretty illogical,” Kyle said. “Many networks/coins have little actual value, it’s all speculation. So a successful fork would likely need someone/something famous behind it, if they get that -- then it’s possible.”

Many companies are likely to take a wait-and-see approach. Back in 2016, Taylor Monahan, now global product lead at MetaMask crypto wallet, was spearheading work on MyEtherWallet, which initially said it wouldn’t support the Ethereum Classic fork. The firm soon had a change of heart.

“With all the things we had happen back then, I’d never say that today,” Monahan said, adding that MetaMask would have to weigh whether to support another forked token. “If there’s an opportunity for someone somewhere to make a boatload of money, it will probably happen.”

(Adds comment from Vitalik Buterin in the ninth paragraph.)