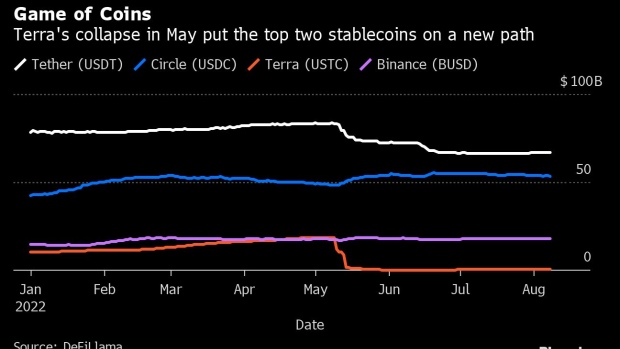 A candlestick chart illustrating Bitcoin price on an electronic screen inside a BitBase cryptocurrency exchange in Barcelona, Spain, on Monday, May 16, 2022. The wipeout of algorithmic stablecoin TerraUSD and its sister token Luna knocked more than $270 billion off the crypto sectors total trillion-dollar value in the most volatile week for Bitcoin trading in at least two years. Photographer: Bloomberg/Bloomberg , Photographer: Bloomberg/Bloomberg

(Bloomberg) -- As crypto’s most traded tokens, stablecoins have ballooned in circulation under a relatively light-touch regulatory regime. That’s about to change.

Lawmakers in the US, the EU, the UK, Japan and others are considering rules that would overhaul the $150 billion sector. Several of these proposed restrictions are intended to bring issuers of the tokens -- which are cryptoassets designed to keep a one-to-one peg with a less volatile currency like the US dollar -- under the same financial regimes as payment providers.

More specifically, regulators want a say over the types of assets that stablecoin providers can use to fill their coffers, and are expected to require more detailed disclosures and fully-backed reserves. The changes could hurt some stablecoins, but already, providers are starting to adapt.

“It’s a case of do or die for stablecoin issuers,” said Hirander Misra, chairman of market infrastructure body GMEX Group. “They will have to prove they have proper reserves and be transparent in terms of being audited, or else will be ultimately forced to cease to exist.”

Stablecoins grew more popular as crypto adoption boomed, acting as a digital asset safe haven from volatile prices. They’ve attracted more scrutiny from authorities this year following the $40 billion collapse of stablecoin pair TerraUSD and Luna in May, which prompted concerns around the processes used to back different stablecoins.

Now, the spotlight is on the major players. Circle Internet Financial Ltd and Tether Holdings — the issuers of the two largest tokens which make up almost 80% of the market, according to DeFiLlama — say they maintain the value of their stablecoins by holding enough reserves of cash and cash equivalents to match the amount of tokens in circulation. Liquid assets make redemption easier and faster, and are generally preferred by regulators and investors over crypto reserves or algorithmic swaps.

But watchdogs want regular proof to back up these claims.

“The riskiness of a stablecoin fundamentally relies on what reserves it’s backed by — in short, the greater the reserve, the lower the risk,” said Sarah Kocianski, an independent fintech consultant. “Being able to accurately assess the riskiness of a stablecoin enables regulators to create appropriate rules, meaning companies’ transparency around their reserves is vital.”

As the crackdown sets in, policymakers want to know how effective those reserves could be in a bank-run scenario.

Christopher Woolard, a former top regulator for crypto at the UK’s Financial Conduct Authority and now an EY partner, said authorities want to avoid a situation where a stablecoin “actually turns out not to have that level of backing” that it claims. He was previously involved in the FCA’s handling of Meta Inc’s now-defunct stablecoin Libra in 2019.

“Central banks will be very worried that they don’t just see some of the issues from money-market funds on steroids,” said Woolard, referring to traditional financial players that buy similar assets to stablecoin issuers.

Some issuers have already begun to change the way they report their holdings.

Circle and Paxos Trust Co LLC started publishing monthly updates on the reserves backing their respective dollar-pegged tokens USDC and PAX. Disclosures this year have included detailed information on the nature of their holdings in cash and US Treasury bills down to the CUSIP, a unique identifying number assigned to registered bonds in North America.

Tether – the largest stablecoin at more than 40% of the market, which was already fined by the CFTC last year for lying about its reserves – currently publishes quarterly attestations on the assets backing its USDT token without those identifiers. The operator said last month that it hopes to release a full audit from a “Big 12” accounting firm in due course.

Managers of money-market funds have said stablecoin providers should be required to submit more detailed information on their holdings. Issuers should be disclosing their reserves on “a daily basis”, said Bill Cannon, head of ETF portfolio management at crypto asset manager Valkyrie.

“This should almost be real-time, because at the end of the day, this is just a cash equivalent and it’s very, very simple to report this,” Cannon said.

Regulators are also concerned about the types of assets being used in stablecoin reserves. The upcoming US Stablecoin Bill, for example, is expected to set out restrictions on providers buying commercial paper — an asset that proved it could be subject to runs after the market melted down in 2020.

But progress was patchy. Tether disclosed last month that it held roughly $8.4 billion in commercial paper at the end of June — around $7 billion more than it had been forecast to hold by that date in a previous attestation. A further update by Tether on July 27 declared it had reached $3.7 billion in paper, with a plan to zero out its holdings by early November.

Read more: Tether Says There Is No Chinese Commercial Paper Among Reserves

Tether’s chief technology officer Paolo Ardoino told Bloomberg the firm had rolled over some of its paper holdings earlier in the second quarter — meaning Tether was re-buying commercial paper from the same issuer, instead of offloading funds directly into Treasuries as promised. Ardoino said all funds gained from matured paper since it released its last attestation in mid-May were used to buy Treasuries.

That Tether had continued to repurchase paper earlier this year is “another gigantic red-flag for financial regulators and more evidence that Congress must step up with serious rules to protect consumers,” US Senator Elizabeth Warren said in an emailed statement to Bloomberg.

Other than landing in the crosshairs of authorities, issuers that fail to keep up may end up losing ground to new competitors.

Regulation could give commercial banks and other large companies more certainty to launch their own stablecoins, said Jeff Tijssen, global head of fintech at Bain & Co Inc.. These could compete with existing tokens for retail and wholesale payments.

Monetary authorities may also enter the fray soon, with more than four-fifths of the world’s central banks surveyed by the Bank of International Settlements last year actively researching the potential for building their own tokens.

Read more: Why Central Banks Got Serious About Digital Money

“To keep up, most of the current stablecoin issuers will need to become regulated entities, and not all will be able to do that,” said Tijssen.