Bitcoin and Ether hit all-time highs amid a broad rally in financial assets that some analysts attributed partly to the search for a hedge against inflation.

Bitcoin, the world’s largest digital token, jumped as much as 3.6 per cent to US$68,513, while Ether posted a more modest advance to about US$4,840. The total value of digital tokens tracked by CoinGecko reached some US$3.1 trillion.

Trying to work out why virtual currencies are rallying is often a fraught task, but some theories pointed to the appetite for assets that can deliver returns even as the pandemic recovery stokes inflation. U.S. equity markets have been hitting record highs almost daily. Bitcoin is up more than 130 per cent this year and Ether some 550 per cent, though for critics the volatility inherent in digital tokens damages their claims to being a store of value.

Inflation hedges are “in demand with crypto leading,” Chris Weston, head of research at Pepperstone Financial Pty, wrote in a note, adding that “crypto is where the fast money is at.” 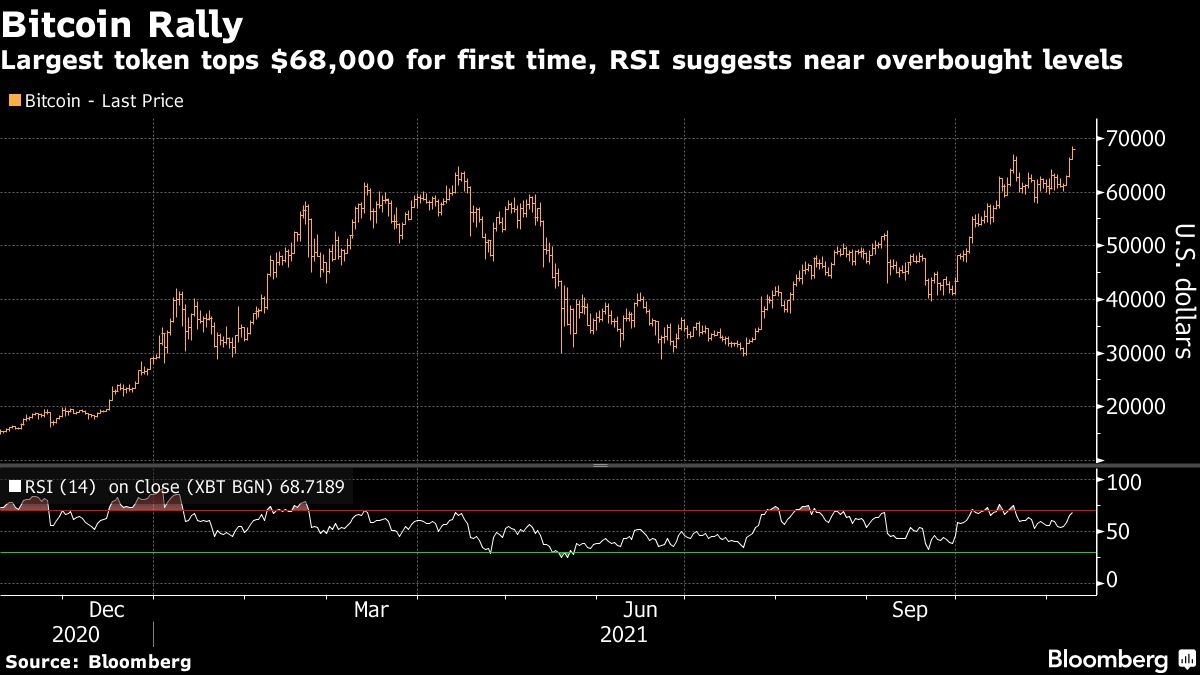 Record-low real yields may also be stoking appetite for riskier investments, potentially pushing some markets to perilous levels. The Federal Reserve in a report warned asset prices are vulnerable if sentiment sours. It also flagged dangers from stablecoins, a type of token supposed to have a steady value.

Bitcoin last scaled a record in October following the launch of the first Bitcoin-linked exchange-traded fund for U.S. investors. The landmark step fed the narrative that virtual coins are winning greater mainstream acceptance, including from institutional investors.

Still, the ride has been volatile. The token plunged below US$30,000 in June amid criticism of its energy consumption and China’s cryptocurrency crackdown. It then recovered in part as the crypto sector adjusted to China’s broadsides.

“This breakout in Bitcoin might signal the start of a final push-up for the fourth quarter before the crypto market shows more pronounced consolidation into next year,” Fundstrat said in a technical-strategy report Monday. “Strength in Bitcoin, Ethereum and many other altcoins looks likely in the weeks to come.”

Another theory for the Bitcoin rally is the seemingly ubiquitous Elon Musk, the world’s richest man. Musk’s Twitter followers in a poll he set up voted in favor of the billionaire selling 10 per cent of his stake in electric-carmaker Tesla Inc.

That brings up the question of what he might do with the proceeds. Musk has previously said he’d like to see Bitcoin succeed and that he personally has bought Bitcoin, Ether and Dogecoin.

Michael Saylor, the chief executive at MicroStrategy Inc., mentioned the claimed benefits of Bitcoin in a reply to Musk’s poll tweet. Converting Tesla’s balance sheet to Bitcoin “would deliver diversification, inflation protection, & more upside for all investors in a tax efficient manner,” he said. Tesla dropped plans to allow vehicle purchases with Bitcoin earlier this year because of concern about the environmental impact of the cryptocurrency.

The little more than decade-old market for digital assets has roughly quadrupled from its 2020 year-end value. Some technical indicators suggest Bitcoin’s ascent may be due a pause, according to Katie Stockton, founder of Fairlead Strategies LLC.

Bitcoin aside, more people are being drawn to the crypto economy for so-called decentralized financial services as well as non-fungible tokens, which allow for digital collectibles like online art.

Blockchain networks like Ethereum and Solana continue to upgrade to deliver such functionality. The nascent metaverse -- an immersive online environment that creates a virtual reality -- also looms as a cryptocurrency playground.

“We will see corrections along the way, no doubt,” said Vijay Ayyar, head of Asia Pacific with crypto exchange Luno in Singapore. “But we’re at a point in the cycle where there is a lot of hype about the asset class and the extent to which it will play a role across industries beyond finance such as gaming, entertainment, social media and art.”