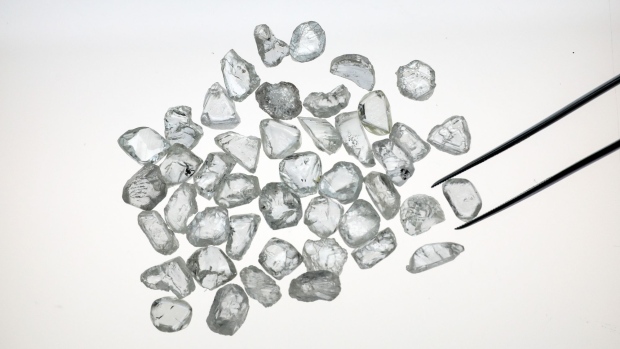 An employee inspects unpolished diamonds at the De Beers SA headquarters on Charterhouse Street in London, U.K., on Wednesday, Feb. 1, 2017. Number 17 Charterhouse Street, a fortress in the heart of London, has been De Beers SA’s headquarters since 1979, but the street has been its home since the 1930s. At its peak 90 percent of the world’s diamonds passed through this structure. , Bloomberg

De Beers sold the most diamonds since the coronavirus crisis brought the industry to a halt, after price cuts and recovering demand lured buyers back.

The gem giant’s sales totaled US$467 million last month, the most since January. The sector came to a standstill early on in the pandemic as jewelry shops and major trading hubs were forced to close, while diamond buyers were restricted from traveling. But there have been signs of recovery in the past two months, encouraged by price cuts from De Beers and Russian rival Alrosa PJSC.

At September’s sale, De Beers lowered prices of smaller diamonds, following similar reductions for bigger stones a month earlier. That coincided with an uptick in demand from trade buyers to replenish low inventories and returning jewelry customers, especially in China.

Still, the industry’s further recovery will depend on consumers returning to jewelry stores, particularly in the U.S., which accounts for nearly half of all sales. The holiday season -- including Thanksgiving, Christmas and Chinese New Year -- is traditionally the busiest sales period.

“We continue to see a steady improvement in demand for rough diamonds,” De Beers Chief Executive Officer Bruce Cleaver said in a statement. “It’s encouraging to see these demand trends, but these are still early days and there is a long way to go before we can be sure of a sustained recovery in trading conditions.”

The Anglo American Plc unit sells its gems through 10 sales a year in Botswana’s capital, Gaborone, and the buyers -- known as sightholders -- generally have to accept the price and the quantities offered.