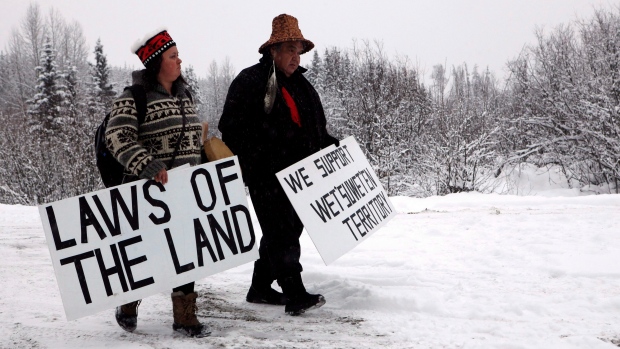 Todd Nelson and Christy Brown from the Nisga'a Nation arrive in support of the Unist'ot'en camp and Wet'suwet'en First Nation gather at a camp fire off a logging road near Houston, B.C., on Wednesday, January 9, 2019. , The Canadian Press

SMITHERS, B.C. - Hereditary chiefs of the Wet'suwet'en First Nation have reached a deal with the RCMP to allow a natural gas company access across a bridge that had been blocked in their territory.

Following several hours of meetings, Chief Na'Moks told reporters Thursday that the agreement is between the chiefs and the RCMP to ensure the safety of the First Nation's members after 14 arrests were made on Monday when a court injunction was enforced by police.

He said representatives from Coastal GasLink were invited to the meeting to ensure they are on the same page, but emphasized it is not a deal with the company and the hereditary chiefs are opposed to a pipeline project planned on their territory by the company.

“One of the barriers will be taken down, but that does not mean we support this project,” he said.

“It must be reiterated, we are adamantly opposed to this proposed project and that will never change, but we are here to ensure the safety of our people.”

Coastal GasLink president Rick Gateman said the company can do its work as a result of the meeting.

“I can say that our discussions were extremely respectful and extremely productive. As a result of these discussions we have worked out many of the details that are required for us to have free access across the bridge and beyond,” Gateman told reporters.

“We look forward to future dialogue and continuing this relationship.”

According to the agreement, Na'Moks says company workers will be allowed across a bridge and the RCMP will also remove a roadblock that was preventing some members of the nation from accessing a Unist'ot'en healing camp near the bridge.

He says members of the First Nation will not face arrest and the Unist'ot'en camp will remain intact.

The agreement applies to an interim court injunction, which is meant to prevent anyone from impeding the company's work until the defendants, which include members of the Unist'ot'en camp, file a response.

The agreement was reached Thursday at the Office of the Wet'suwet'en, a day after the chiefs announced a tentative deal would see members of the First Nation observe the injunction by allowing Coastal GasLink workers and contractors access to a work site where the natural gas pipeline is planned.

On Wednesday, residents of the healing camp said they were “reeling” from the situation and had asked that a gate that they see as vital to their safety remain intact.

Na'Moks said a metal gate will remain, but a wooden gate will be removed. It is too wide for the bridge and constitutes an obstruction, he added.

When the RCMP enforced the injunction they also dismantled a nearby checkpoint erected by members of the Wet'suwet'en, who say the company does not have authority to work on their territory without consent from the nation's hereditary clan chiefs.

TransCanada Corp. says it has signed benefit sharing agreements with the elected councils of all 20 First Nations along the pipeline route. Its Coastal GasLink pipeline would run though the Wet'suwet'en territory to LNG Canada's $40 billion export terminal in Kitimat, B.C.

In Kamloops on Thursday, Prime Minister Justin Trudeau said the events of this week when the injunction was enforced show the need to build a different relationship with First Nations.

Trudeau said he was pleased tensions had eased between police and the First Nations over the pipeline on Wednesday night, and the time will come to answer questions about what was done and how it could have been handled differently.

“The way we are doing resource development, construction, exporting of our resources is changing in this country,” he said.

“We know we cannot do it without creating partnerships and engaging with Indigenous Peoples who are the traditional custodians of these lands, without thinking deeply about the environmental consequences and the long-term impacts of the choices we're making.”

- With files from Laura Kane in Kamloops, B.C.