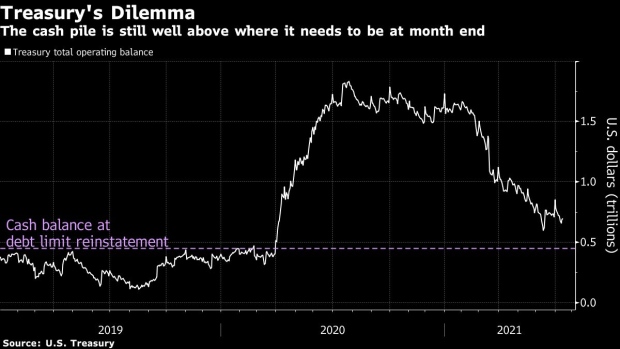 (Bloomberg) -- The imminent return of the U.S. debt ceiling is causing angst for money-market traders once again.

While the risk that Uncle Sam might default by missing a payment on a bill or two is minuscule, investors are wondering if and how the Treasury can slash its giant cash pile to the level the department has indicated would be consistent with its policies and the 2019 act that suspended the limit. And they’re concerned about the impact any moves could have on short-term funding markets, which underpin much of the global financial architecture.

The Treasury Department has indicated it would reduce its cash balance to $450 billion by July 31, when the debt cap’s suspension ends. The reason for this is to prevent the Treasury from building up a cushion ahead of a suspension. But it’s unclear whether the government is on track to reach its target from a current balance of $700 billion -- or what will happen if it fails to do so. Indeed, projections by financial research firm Wrightson ICAP indicate that the cash balance will be above $450 billion at the end the month.

“With the little time that is left, something has to give,” said Zachary Griffiths, strategist at Wells Fargo & Co. “Either they just aren’t going to get down to $450 billion, or they will have to accelerate outflows of Covid-relief funding, or otherwise do a very severe bill paydown. And if they do have this almost bill-issuance cliff, you will get renewed downward pressure on bill rates.”

Naturally, part of this excess will be consumed by fiscal spending. But flows into government coffers from things like tax receipts and borrowing will partially offset that. So the most effective way to shrink Treasury’s cash pile will be to further slash bill auction sizes.

The risk of this is exacerbating a supply-demand imbalance that’s already suppressing front-end yields, which could, in turn, threaten the Fed’s grip on key benchmarks. The central bank recently tweaked the rate it offers on its so-called reverse repurchase facility -- and a related benchmark on excess reserves -- to reassert some control there. But those tools aren’t invincible.

So even though many traders and strategists expect Congress to eventually reach a ceiling deal -- and the use of extraordinary measures means that doesn’t have to happen before July 31 -- there’s still a decent chance of fireworks. Add to that the precariousness of economic growth, large and volatile government expenditures and the uncertainty surrounding the unusual measures themselves, and even savvy veterans are struggling to figure out what’s going on.

“There is a lot of uncertainly in the marketplace around the path of the cash balance,” said Teresa Ho, a strategist at JPMorgan Chase & Co. “It’s the number one question we’re being asked by clients. They are wondering about the extraordinary measures aspect as well as if Congress will raise or suspend the limit again, and when.”

Congressional Democrats still don’t have a plan for how to raise the debt ceiling and haven’t decided whether to insert it into a fast-track budget bill that can pass without Republican support. House Majority Leader Steny Hoyer said Tuesday that he hopes there would be bipartisan support for suspending the debt ceiling.

While the back-and-forth over the debt ceiling is a familiar Washington game, in the past debt traders could see the trajectory of Treasury’s cash pile. That’s murkier now, confounding investors already grappling with T-bills being in short supply.

Back in May, Treasury said its cash balance, known as the Treasury General Account, or TGA, would be $450 billion by July 31. Treasury Secretary Janet Yellen said this month in an interview with Reuters that the department expects to reach that target.

Many investors doubt Treasury can actually do this over the next week and a half unless it can somehow accelerate Covid-relief outflows -- because cutting Treasury bill issuance further would be a dire step. Government cash flows are unclear even into next month, as the fate of Joe Biden’s agenda remains in the balance.

Bill paydowns are when the government sells less debt than is maturing, thus reducing what’s in circulation. The Treasury has removed close to $800 billion of bills from the market since the beginning of the year. That reversed some of the ramp-up that drove the cash balance to a record $1.8 trillion last year.

Rates for repurchase agreements, Treasury bills and other short-term dollar instruments have traded near or below zero for most of the year, which finally forced the Fed last month to defend its target range by lifting its administered rates. Now securities are trading around the new floor of 0.05%.

Downward pressure on rates is likely to continue given the abundant cash in the system from the Fed’s asset purchases, any further declines in the TGA and bill sale cuts. That could drive demand for the central bank’s reverse repo facility, or RRP, toward the record high of $992 billion set in June.

This backdrop could lead “banks and money-market funds to use the RRP more aggressively in anticipation of a big drop in the cash balance,” said John Velis, a strategist at Bank of New York Mellon, adding that there’s a lot of “confusion and uncertainty” surrounding this in the market.

Still, it hasn’t been enough to give strategists confidence the cash balance will fall to $450 billion. That’s the fear the market is currently absorbing.

“Given how careful and prudent Treasury tends to be, I would be surprised if they miss their own guidance on something like that,” said Gennadiy Goldberg, senior interest rates strategist at TD Securities, referring to the cash balance target. But if they miss and “Congress made a big fuss, it could mean a big shrinking of bills outstanding to make it happen and get Treasury down to that level. I’m just not sure how that fight would shake out.”