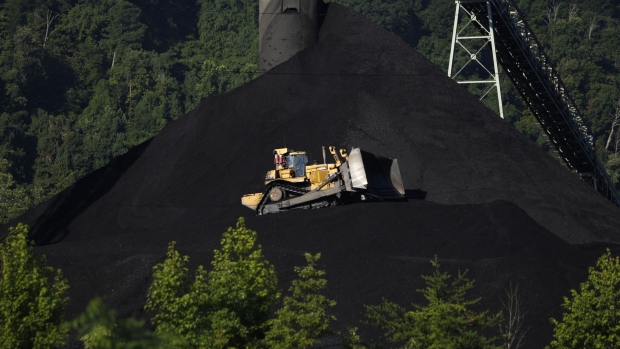 A Caterpillar Inc. bulldozer operates on a coal mound at the Alpha Natural Resources Inc. Mammoth Preparation Plant in London, West Virginia, U.S., on Wednesday, July 18, 2018. The coal industry is likely to confront a much less threatening emissions rule from President Donald Trump's EPA, which is seeking to repeal and replace the Obama-era Clean Power Plan. , Bloomberg

(Bloomberg) -- Senate Democrats are developing a carbon-tax proposal that could potentially be used to offset some of the costs of a sweeping social-spending bill as well as direct cash payments to households, according to a key lawmaker.

“It’s projected that making polluters pay -- when combined with clean energy tax credits -- would lower the cost of clean electricity for Americans,” Senate Finance Committee Chairman Ron Wyden said in a statement to Bloomberg News Friday. “I’ve worked on this for years, and have continued to develop the proposal as part of my menu of options for the caucus.”

A “substantial portion” of the revenue generated from a carbon tax would be disbursed to Americans in the form of cash payments, Wyden said. That could help increase public support for the tax, but would also mean less money to offset the cost of the up-to-$3.5 trillion so-called reconciliation bill.

Momentum for such a levy is gaining support as a way of combating climate change in some circles. And economists have long favored a carbon tax as a simple, predictable approach to putting a price on the greenhouse-gas emissions that drive climate change.

Advocates say it would incentivize companies and consumers to pollute less. The American Petroleum Institute, the oil-industry trade group that counts Exxon Mobil Corp. among its members, and the Chamber of Commerce, have both endorsed a price on carbon, which could take the form of a levy.

But industry supporters generally want the carbon tax imposed as a substitute for existing regulations on greenhouse gases -- a tradeoff that is unlikely to be part of the plan Democrats are assembling.

A tax that could increase the costs of driving, flying and consumer goods is likely to face stiff political resistance from some quarters, and Republicans previously have voted against the concept of placing a tax on carbon dioxide. Some moderate Republicans, including Lisa Murkowski of Alaska and Mitt Romney of Utah have signaled they are receptive to the idea.

GOP opposition wouldn’t be able to nix the proposal, because Democrats aim to pass the tax-and-spending bill on a party-line vote. Still, Democrats have tight majorities in both chambers, meaning that they need nearly every member in the House and all 50 caucus members in the Senate to support the legislation.

Senator Joe Manchin, a moderate Democrat who represents coal-reliant West Virginia, would be a key consideration in the drafting of a carbon tax. Manchin has been non-committal on the issue, but voted with members of his party on a messaging amendment earlier this year in support of such a tax.

Supporters argue that a domestic carbon tax would have to be paired with a levy on imports -- known as a carbon border adjustment tax -- to protect U.S. workers in energy-intensive industries and to ensure that companies don’t shift manufacturing out of the U.S. to nations with lax environmental regimes.

National Climate Advisor Gina McCarthy Bloomberg in July that while “it’s not off the table,” there are strategies other than a carbon border adjustment tax that may be more beneficial. Even so, U.S. Special Presidential Envoy for Climate John Kerry on Wednesday dangled the prospect of a tariff on carbon-intensive imports if other nations don’t limit their emissions and reliance on coal-fired power to fuel cheap manufacturing.