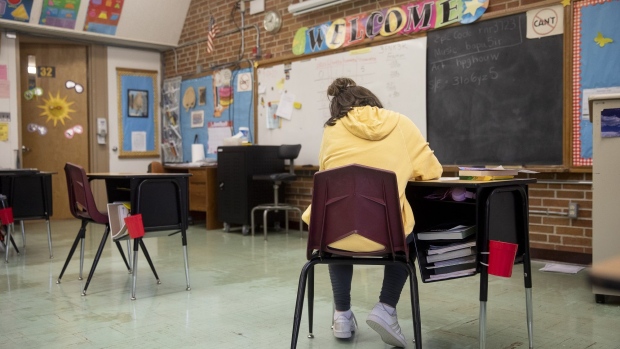 A student works at a desk in a fifth grade classroom at Logan Jr. High School in Princeton, Illinois, U.S., on Tuesday, Sept. 1, 2020. The Illinois State Board of Education has "strongly encouraged" a return to full, in-person instruction in the fall, as long as the regions are in Phase 4 of reopening. , Bloomberg

(Bloomberg) -- Congressional Democrats are looking to invest $130 billion in the nation’s crumbling schools, partly by reviving a type of debt financing killed by tax reform during the Trump administration.

The Rebuild America’s Schools Act, which went to committee markup Wednesday, would establish a $100 billion grant program and authorize $30 billion of school infrastructure tax credit bonds, both aimed at high-poverty schools around the country where shabby infrastructure poses a health risk to students and staff.

The somewhat obscure securities would likely be embraced by investors in the $4 trillion muni market, and schools would get a new tool for borrowing. “Issuers like having flexibility, and this is a structure that has had a long history in the market,” said Jamie Iselin, head of muni fixed income for Neuberger Berman. “There is typically an investor for every type of security.”

The debt portion of the proposed bill would reauthorize tax credit bonds, or TCBs, for school construction purposes after former President Donald Trump’s Tax Cuts and Jobs Act eliminated them. Unlike tax exempt muni-bonds, which exclude interest from federal taxes, TCBs give a credit or payment to the issuer or investor.

Passage could be politically challenging, especially with midterm elections around the corner. “I can’t foresee any type of dynamic that develops in the coming months that makes something like this a potential reality,” said Tom Kozlik, head of municipal research and analytics at Hilltop Securities.

TCBs, in some form, have drifted in and out of tax legislation since they were first issued in 1998 as qualified zone academy bonds, or QZABs. The American Recovery and Reinvestment Act of 2009 created qualified school constructions bonds, as well as Build America Bonds, which like TCBs, allowed the federal government to subsidize state and local borrowing.

They were popular among investors because they offered taxable exposure to good credits at attractive spreads, Kozlik said. Many issuers, however, were frustrated when the federal subsidy was cut during the 2013 budget sequestration.

Over half of U.S. school districts need infrastructure overhauls, such as new heating or ventilation systems, in the majority of their buildings, according to a June 2020 report from the Government Accountability Office.

The Covid-19 pandemic threw that need into greater focus, with more than 40% of districts planning to spend American Rescue Plan funds on HVAC improvements, according to Burbio, a school data firm.