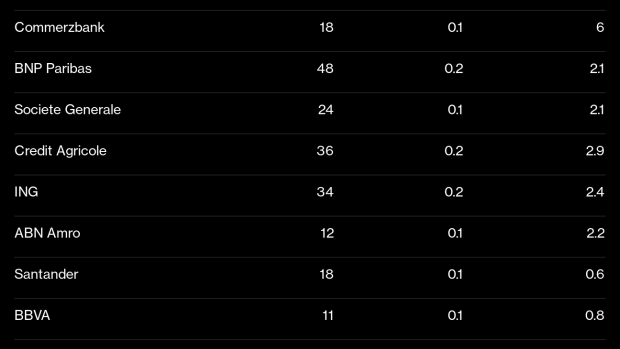 Germany’s largest lender stands to save roughly 200 million euros ($222 million) in annual interest payments thanks to a new rule that exempts a big chunk of the money it holds at the ECB from the negative rate the central bank charges on deposits. That’s equivalent to 10% of the pretax profit the analysts expect the bank to report in 2020, compared with an average of just 2.5% for the EU banks included in the analysis.

The ECB yesterday lowered its deposit rate by 10 basis points to -0.5% as it grapples with persistently low inflation and a weakening economic outlook in the euro area. Banks have said the move will make it even harder to improve their already low profitability. Deutsche Bank Chief Executive Officer Christian Sewing said last week that negative interest rates will “ruin the financial system” in the long run.

The second-biggest tiering beneficiary is Commerzbank AG, the analysts said in the report Friday. The bank is set to save about 100 million euros, or around 6% of its 2020 pretax profit. The total relief for the banking system is about 1.7 billion euros, they said.

“Banks would like to have positive rates, unquestionably,” Draghi said at the ECB’s press conference on Thursday. But profitability is much more affected by costs, and adapting to new technology would be “much more compelling than being angry about negative rates,” he said.

--With assistance from Donal Griffin.

To contact the editors responsible for this story: Dale Crofts at dcrofts@bloomberg.net, Ross Larsen, Christian Baumgaertel