Didi Global Inc. shares jumped more than 14 per cent after the company said it began preparations to withdraw from U.S. stock exchanges, a stunning reversal as it yields to demands from Chinese regulators that had opposed its American listing.

The ride-hailing giant’s board has authorized the company to file for a delisting of its American depositary shares from the New York Stock Exchange, it said in a statement Thursday. It will pursue a listing in Hong Kong and ensure that the U.S. stock will be convertible into freely tradable shares on another internationally recognized stock exchange.

Didi is aiming to file for the Hong Kong listing around March, people with knowledge of the matter said, asking not to be identified as the plans haven’t been made public. Based on the normal process in Hong Kong, it could aim for a summer listing if everything goes smoothly.

The unprecedented move underscores the depth of Beijing’s concern about the potential leakage of sensitive data to its geopolitical rival, as well as the extent to which the government will go to punish Didi for contravening its wishes. Chinese regulators had asked Didi’s top executives to devise a plan to delist from U.S. bourses because of concerns about leakage of sensitive data, Bloomberg reported last week.

Didi rallied to US$8.90 in Friday premarket trading, still well below its US$14 debut level. SoftBank Group Corp., the firm’s largest minority shareholder, dropped as much as 3.1 per cent in Tokyo on Friday before paring losses. Chinese tech shares briefly touched record lows in Hong Kong, extending a rout that has wiped out about US$1.5 trillion of combined market value from the Hang Seng Tech Index since a February peak.

Didi’s plans to sell shares in Hong Kong and delist in the U.S. reduces risk of a messy, forced delisting by regulators in both China and the U.S. and may signal that Chinese authorities’ crackdown on it has peaked. The company’s statement bolsters our view that a Hong Kong IPO will come before a U.S. delisting, with a seamless conversion of ADSs into Hong Kong-listed shares.

Despite the rally, Didi remains down more than 40 per cent from its IPO -- a stark reminder for investors of the risks of betting on Chinese stocks during an increasingly heavy-handed Xi Jinping administration. The way Beijing has gone after not just Didi but a swath of internet firms makes it clear the government will prioritize national interests at the expense of global investors.

Several of Didi’s most influential and longest-running backers said they weren’t consulted on the plan and learned of the delisting decision through an official Didi blogpost Friday, people familiar with the matter said. That’s unusual in China’s corporate world, where stakeholders are often pinged systematically for feedback. The company put out its statement after meeting with regulators, and after Bloomberg News reported on the impending move last week, one of the people said, asking not to be identified speaking about a sensitive matter. Didi’s board convened on Thursday and made their snap decision then, another person said. Representatives for the company didn’t immediately respond to requests for comment on its Hong Kong listing timeframe or the meetings.

The Beijing-based firm sparked the ire of authorities when it proceeded with its New York stock offering this summer, despite requests that it ensure the security of its data before the IPO. Regulators placed the company under a cybersecurity review days after its debut, removed its services from domestic app stores and has since asked Didi to work on plans for a withdrawal from the NYSE. 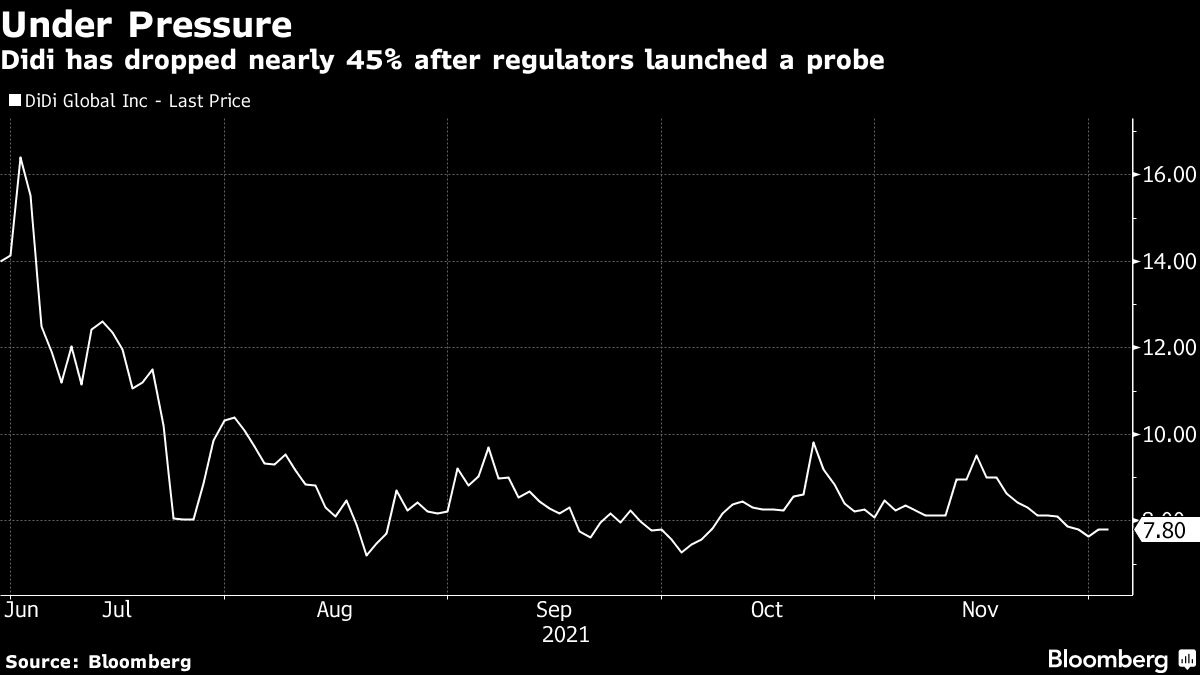 Didi executives had considered proposals including a straight-up privatization or a share float in Hong Kong followed by a delisting from the U.S., people with knowledge of the matter told Bloomberg. If the privatization proceeds, the proposal will likely be at least the US$14 IPO price since a lower offer so soon after the June initial public offering could prompt lawsuits or shareholder resistance, the people had said. If there is a secondary listing in Hong Kong, the IPO price would probably be a discount to the share price in the U.S.

Didi’s decision follows mounting pressure from both Washington and Beijing on the universe of Chinese companies listed in the U.S., from its biggest tech giants to old-economy stalwarts like PetroChina Co. The U.S. government is inching further on efforts to boot Chinese companies off American stock exchanges for not complying with Washington’s disclosure requirements. At the same time, Beijing is said to be drafting regulations to effectively ban companies from going public on foreign stock markets through variable interest entities, according to people familiar with the matter, closing a loophole long used by the country’s technology industry to raise capital from overseas investors.

The Securities and Exchange Commission on Thursday announced its final plan for putting in place a new law that mandates foreign companies open their books to U.S. scrutiny or risk being kicked off the New York Stock Exchange and Nasdaq within three years. China and Hong Kong are the only two jurisdictions that refuse to allow the inspections despite Washington requiring them since 2002.