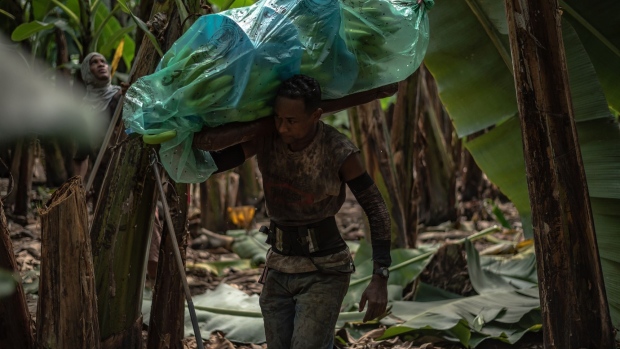 (Bloomberg) -- In the banana plantations of the tropical lowlands of Ecuador, workers are being issued with protective clothing and disinfectant is provided for their tools.

The safety precautions implemented in the farms that stretch between the Andes and the Pacific coast are not simply to guard against the coronavirus. They’re a foretaste of what will be required to shield the valuable crop against another disease, one that poses an existential threat to a $25 billion industry.

Bananas have a claim to be the modern world’s first globalized product and are still the most exported fruit on the planet. Yet the trade that began some 130 years ago is now a potent symbol of the underlying fragility of globalization. How it adapts and responds may suggest a path toward rebuilding international consensus in the post-pandemic era.

The fiber and vitamin-rich fruit is such an everyday item that it’s easy to overlook the environmental, social and political issues inherent in where they come from, and the economic reality of what it takes to get them to supermarket shelves. Grown in the south and shipped to markets in the north, much of the supply chain put in place in the 19th century is still in use today.

Just as coronavirus ravages the world in the absence of a vaccine, so the banana disease fusarium wilt is marching inexorably around the globe, leaving a trail of scorched plantations in its wake. A strain known as Tropical Race 4 (TR4) first identified in Taiwan some two decades ago has spread throughout Asia to the Middle East and Africa before its arrival in the banana heartlands of Latin America late last year, when it was detected in Colombia.

It is considered among the most destructive of all plant diseases, according to the Food and Agriculture Organization of the United Nations, or FAO. “Biosecurity measures” including “on-farm quarantine” are recommended to mitigate its spread, but as with Covid-19, there is no treatment. Once the soil is contaminated, there’s no hope of elimination; the only recourse is to abandon the land and move elsewhere.

The industry was beginning to adapt to the fusarium threat, and the same biosecurity measures intended to protect against it are being used in the coronavirus response, said Juan José Pons, coordinator of the Banana Cluster of Ecuador that includes the industry’s guilds and associations.

Ecuador’s 8,000 banana producers will all need to “become more productive, more efficient, with better biosecurity controls that can guarantee future sustainability,” he said.

In reality, the banana trade was at a crossroads before TR4 arrived in Latin America, which together with the Caribbean accounts for more than three-quarters of world banana exports.

Add in Covid-19, and “the industry is really at a turning point,” said Pascal Liu, a senior economist at the FAO in Rome and coordinator of the World Banana Forum, a stakeholder group for everyone from growers to retailers, NGOs and research institutes.

Climate change, environmental degradation, the power of supermarkets to dictate prices and growing pressure to improve the lot of workers, the banana industry has been under siege on multiple fronts for some time now.

As the world’s biggest exporter, Ecuador is at its epicenter. The country on Latin America’s Pacific coast accounted for around one third of the 20 million tons of bananas shipped globally last year. The fruit is worth more to Ecuador than the oil industry after the collapse in crude prices—some $3.2 billion last year, the equivalent of 3% of the economy.

It’s also been home to one of the worst outbreaks of coronavirus in Latin America, at one point with bodies lying in the streets of the port of Guayaquil, Ecuador’s largest city.

The epidemic caused logistical difficulties at the port, with staff shortages and a lack of temperature controlled containers resulting in temporary interruptions in shipments. There was little or no disruption to work on the plantations, however.

Indeed, the banana looks like one of the winners of the crisis, with its reputation as a healthy snack helping to boost global demand during lockdowns. Anecdotally, sales are up in the European Union, the world’s largest importer.

But that hasn’t translated into a boon for the banana growers or importers, whose costs have risen due to the logistical disruptions and the implementation of safety measures. Seasonal factors have also weighed in, driving down spot prices for a 40-pound (18 kilogram) box to as little as $2 or $3.

“There is definitely pressure on those perhaps 30% of producers who are selling very cheaply because they have to sell,” said Kléber Sigüenza, president of banana producer Orodelti, which has close to 3,000 workers in two dozen Ecuadorian plantations, mostly in Guayas province, whose capital is Guayaquil.

Sigüenza sells bananas to exporters including multinationals under fixed contracts. But the ranks of smaller producers that employ some 40,000 workers have no such guarantees. While the immediate impact may be limited, he doesn’t see a significant rebound any time soon. That has consequences for the industry’s capacity to handle its deeper issues.

Lower prices limit the ability of producers to respond to environmental concerns over the use of toxic pesticides, which pollute groundwater. They also reduce the possibility of adapting to climate change, whose effects are already being felt in the Caribbean. The Windward Islands have suffered repeat hurricane damage that hit production, while Jamaica has ceased exporting bananas altogether.

The banana trade was traditionally lucrative. The relation between the fruit and money is clear from the position of the former Banana Docks in Manhattan, just below Wall Street. In London, bananas from Jamaica were landed at the Royal Docks, now the site of City Airport.

It also has a dark history. In the early years of the 20th century, “banana wars” were fought to secure U.S. interests over plantation land in Central and South America.

The trade became synonymous with U.S. corporate might flexed at the expense of workers and governments in the producer countries, the original “banana republics.” The so-called banana massacre of striking United Fruit Company workers by army troops in 1928 was adapted by Gabriel Garcia Marquez for his novel “One Hundred Years of Solitude.”

The world’s favorite fruit has also earned itself a place in popular culture. The Velvet Underground’s 1967 debut album featured a banana cover by Andy Warhol. In communist Eastern Europe they were a sign of affluence, with the privileged families of party officials in Poland nicknamed the banana youth. Even now, the most popular Halloween costume for American babies in 2019 was the banana, a Google Trends report found.

The influence wielded by the old traders has long since faded as the world became more globalized. The United Fruit Company was incorporated into Chiquita Brands International Inc., which is now held by a Brazilian agribusiness, Grupo Cutrale. Fyffes Plc, the oldest fruit brand in the world, was sold to Sumitomo Corp. of Japan in 2016.

As with so much produce, the real power now lies with the supermarket chains, which deploy bananas as a weapon in price wars, selling them at a loss to lure customers. The retailers hold the leverage of trade between consumers and producers, enabling them to set prices and often driving down margins.

David McCann, chairman of Fyffes, Europe’s largest banana supplier, says the arrival of “big retail” is one of the most significant developments for the trade of recent decades. He is in favor of a higher price for bananas so that “everybody gets a little more share.”

“It’s not easy being a retailer, so they naturally push for good quality product at the best possible price they can achieve it,” he said. But he would “certainly love to see a somewhat higher retail ticket with everybody along the chain getting a little bit more out of it.”

At the Belgian city of Antwerp, the world’s largest banana port, a typical ship will unload more than 2 million bananas packed in 50 containers in a morning. From there, they are taken around Europe by rail, road or barge to be ripened according to taste. (Belgians and Germans eat theirs greener than the British; Scandinavians prefer them bigger.)

New safety measures introduced because of coronavirus mean the terminals and cold stores remain fully operational, and banana volumes “are quite stable,” a port spokeswoman said.

That’s a reflection of the banana’s importance to the food chain. In a world where food security has catapulted up the agenda, the banana and its cousin the plantain rank ahead of maize as a staple in some 80 countries. Irish Prime Minister Leo Varadkar chose a Fyffes ripening facility in Dublin to reassure the public that fresh food would get through.

For Alistair Smith, international coordinator of Banana Link, a campaign group that advocates on behalf of smaller producers and workers, the pandemic is focusing minds within the trade to reappraise how it operates.

Above all in an age of disease, the export trade’s reliance on a single variety, the Cavendish, raises uncomfortable questions about its future viability.

“The industry is very seriously worried about its own sustainability in every definition of sustainability: economic, environmental or social,” said Smith. “We need to view the banana world differently from the way we’ve viewed it so far, which is as an export commodity to satisfy northern markets and keep it cheap and keep it plentiful.”

Yet for all its troubles, the industry has been here before. Until the 1950s, a banana known as the “Gros Michel”—or the “Big Mike”—was the dominant export variety. A previous incarnation of fusarium wiped it out, but the industry rallied and introduced the Cavendish to consumers.

McCann of Fyffes has seen one version of the future close up: visiting banana farms in Columbia in February, he had to wear a hazmat suit, not to shield against Covid-19 but fusarium. He maintains there is “every reason to be confident.”

“I somehow expect we will have trouble and nuisance and cost and eventually a slightly different variety will resolve it,” he said. “Slowly we’re getting there.”

There are encouraging signs. The main players are starting to pool their research and development resources to develop a disease-resistant variety. In February, French retail giant Carrefour introduced two new varieties, the organic Pointe d’Or and a banana produced without insecticides using “agro-ecological” methods.

Antwerp cites a surge in demand for organic bananas, worth a premium to producers, while German Development Minister Gerd Mueller has called for sustainability criteria to be a part of every trade deal the EU signs. Only 13% of the sales price of a regular banana goes to the producer, whereas for Fairtrade bananas it’s 43%, he says, arguing for a minimum price to prevent “slave wages” in producing countries.

Even those retailers that have been among the most aggressive in driving down margins have raised their pricing, albeit modestly, said Smith of Banana Link. He cites a “sea change in consciousness” among the big companies “as to what the future of production is going to look like.”

In Ecuador, however, change remains elusive, according to Jorge Acosta, leader of the ASTAC banana workers’ union in Guayaquil. The large farms, or haciendas, “are working more or less normally,” but small producers are not being paid the official price, which is almost impossible for the government to enforce.

For Acosta, now is “the right moment for Latin American companies to get together and demand a fairer price” for the region’s bananas. ASTAC proposed that plantations and companies reduce production, with importers and supermarket retailers compensating by paying a higher rate. He’s still waiting for a response. “The laborers are the ones who always end up paying for the banana crises,” Acosta said.

This crisis might just be different. Just as Covid-19 will lead to new ways of producing and consuming, so it may spur the banana industry to change, says the FAO’s Liu. “This pandemic is a disaster for the world,” he said. “But maybe the silver lining is that humans can think about doing things in a more sustainable way.”