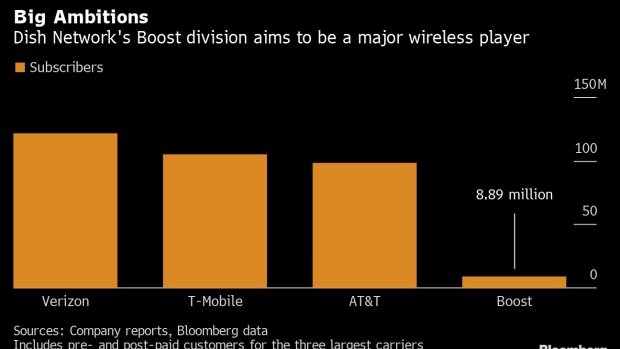 (Bloomberg) -- Dish Network Corp., which has bet more than $20 billion to challenge the giants of the mobile-phone industry, is ready to flip the switch on a superfast wireless service -- and its own future.

The satellite-TV provider, pivoting to wireless as the pay-television industry shrivels, plans a one-two punch in the coming weeks: It will reboot the Boost Mobile service and aggressively promote the launch of a new 5G network, starting in Las Vegas.

“Come fourth quarter, you’ll start to see some of these pieces come together in loud way,” Stephen Stokols, chief executive officer of Dish’s Boost Mobile unit, said in an interview.

Dish is trying to thread a needle marketing-wise, aiming at both high end and low-end customers. Boost, a low-priced service popular among people with iffy credit profiles, will continue to target bargain hunters. The so-far unnamed 5G service will seek to attract competitors’ bedrock subscribers. To get attention, the company will need to be creative, according to Roger Entner with Recon Analytics LLC.

“Dish needs to dramatically and significantly break the model,” Entner said. “They’re not going to do that just by offering a $5 to $10 cheaper price. I’m looking for something radical.”

The company may say more when it releases financial results on Aug. 9. Dish has been assembling the pieces for its wireless business for years, buying up airwaves, hiring leaders and lining up partners to support its efforts. At times, analysts have said its spectrum holdings exceed the value of the company, which stands at around $34.4 billion.

Boost, which has about 9 million customers and bills itself as a “hip” prepaid brand, will try to market its prepaid mobile service to people using more expensive “postpaid” or monthly service plans. Las Vegas will be the first of several cities offering Dish’s 5G service.

With the launch of its new network, Dish will also offer its own 5G Android phone, named Celero, which is “Latin for speed,” Stokols said.

To help, Englewood, Colorado-based Dish will be enlisting national retail partners to market its services, and plans to introduce a new brand for its nationwide 5G service, Stokols said. The timing coincides with the start of the AT&T agreement, he said.

Dish bought Boost as part of T-Mobile’s US Inc.’s $26.5 billion takeover of Sprint Corp. last year. The Justice Department wanted to create a fourth major wireless competitor and required T-Mobile to divest the business. Dish, with its own stockpile of airwaves, agreed to take over.

Charlie Ergen, who co-founded Dish with his wife when they were selling satellite dishes from the back of a truck in the 1980s, has long plotted to challenge the big carriers -- Verizon Communications Inc., T-Mobile and AT&T -- with a better network. He has called Dish’s ambition the Manhattan Project.

Ultimately Dish plans to sell 5G applications to industries like manufacturing, as well as superfast mobile connections to consumers. But the company still has hurdles to clear: It’s more than two years behind on 5G construction compared with the major carriers. And it lacks their scale and resources.

Without offering specifics, Stokols said Boost wants to convince customers of AT&T, Verizon and T-Mobile to drop their higher-end monthly subscriptions and sign up for its cheaper prepaid service or a new postpaid service that’s in the works.

Boost has been moving up market, said Stokols, who previously founded and ran FreedomPop, a prepaid mobile service. The customer base had an average annual income of $50,000, he said, but lately the range is between $50,000 and $80,000.

“We want to move up market and attack,” Stokols said. “We think we have to be in that postpaid place to do that. It will be a stepping stone to a new 5G brand.”

But at least one analyst said the company needs to also focus on making sure its new network works as promised.

“Dish’s biggest challenge is getting its network built and providing adequate coverage with reliable service across the vast U.S. geography,” said Tammy Parker, an analyst with GlobalData. “That takes money and time, two things that Dish may not have enough of.”