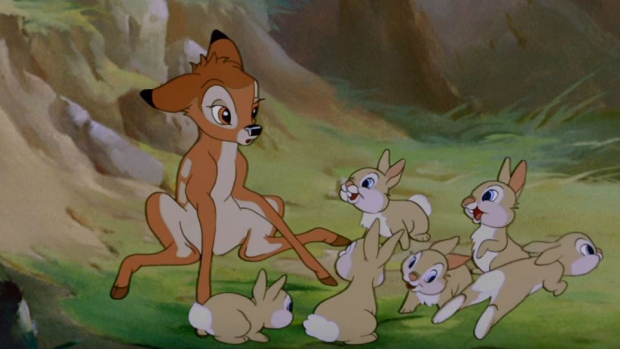 Walt Disney Co. is developing a live-action remake of the company’s 1942 movie “Bambi” as part of its lucrative effort to reimagine classic films for new audiences.

The world’s largest entertainment company hired two writers to pen a screenplay based on the story of a motherless fawn and his menagerie of friends in the forest. Disney hasn’t committed to a production or release date.

Disney has largely had a string of hits with its remake strategy, which dates back at least to 2010’s “Alice in Wonderland,” starring Johnny Depp as the Mad Hatter. The company, which dominated the box office in 2019, had two remakes that took in more than $1 billion in ticket sales worldwide each -- with “Aladdin” in May and “The Lion King” in July. More are in the works, including “Mulan,” a remake of the 1998 animated hit. It’s due to hit theaters in March.

The remakes keep characters such as Belle and Cinderella fresh in the minds of new generations of kids, and can lead to more sales of consumer products and trips to the company’s theme parks. The new “Mulan,” partially shot in China and featuring a largely Chinese cast, sets it up for a potentially strong performance in that country.

“They’re making a lot of money,” said Doug Creutz, an analyst with Cowen & Co. of the remake strategy. “When people stop going, that’s when they’ll stop making them.”

Not all of the remakes have been hits. Last year’s “Dumbo,” a darker retelling of the 1941 animated classic, generated about $353 million in worldwide box office. That’s well below average for a big-budget Disney release. It was directed by Tim Burton, who has done several of the remakes.

Some of the films are a straightforward retelling of the original. Others, such as the “Maleficent” series and next year’s “Cruella,” provide back stories of supporting characters from previous pictures.

Last year’s talking-dog redo of “Lady and the Tramp,” featuring F. Murray Abraham as a singing Italian restaurateur, went straight to the company’s new Disney+ streaming service, which is hungry for fresh content.

In some cases Disney’s theme park rides even become movies, such as the upcoming “Jungle Cruise,” starring Dwayne “The Rock” Johnson as a riverboat captain leading a budget tour excursion along the Amazon.

The Hollywood Reporter published details about the “Bambi” project earlier Friday, including the naming of writers Geneva Robertson-Dworet and Lindsey Beer.