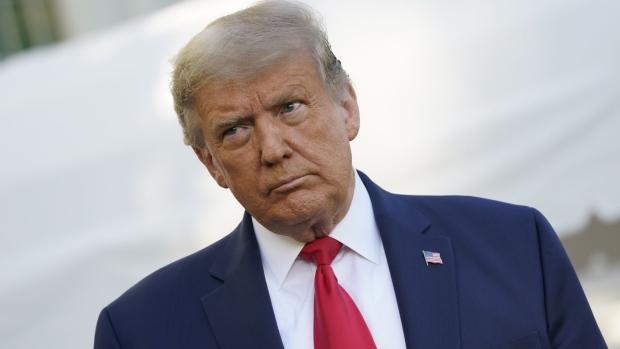 (Bloomberg) -- A federal appeals court on Thursday freed the Justice Department to resume using the thousands of documents seized from Donald Trump’s Mar-a-Lago home in its criminal investigation following months of legal wrangling with the former president.

Trump appeared to drop the fight over the records, at least for now. His lawyers didn’t immediately challenge a Dec. 1 decision from the 11th US Circuit Court of Appeals dismissing Trump’s case before the ruling officially took effect.

The 11th Circuit ordered an end to an outside special master’s review of the documents and lifted an injunction that had blocked investigators from using them in the criminal probe in the meantime. A three-judge panel ruled that a Florida federal judge lacked jurisdiction to intervene in the investigation at Trump’s request.

Although there were still a few possible paths for Trump to try to revive the case — petitioning the US Supreme Court or arguing for the 11th Circuit to take another look — his decision not to push either court for a stay to continue to restrict the Justice Department’s access reflected a lack of urgency to keep up the fight.

Trump’s spokesperson Steven Cheung provided a statement that said: “President Trump will continue to fight against weaponization of law enforcement and pursue appropriate legal avenues to obtain the items that were brazenly and illegally seized from his home during the Biden regime’s unconstitutional raid.” The statement didn’t offer details of what those next steps might be.

The case had been vigorously litigated until now. Trump and his supporters went on the attack immediately after FBI agents executed a search warrant at his Florida home on Aug. 8. Trump accused the Justice Department of pursuing a politically motivated investigation and securing an over-broad warrant to seize a range of documents and other items from Mar-a-Lago.

Federal investigators are exploring whether government records, including some classified at the highest levels of secrecy, were mishandled. The Justice Department will regain access to the full set of documents just as the special counsel appointed by Attorney General Merrick Garland to oversee the Mar-a-Lago investigation, Jack Smith, settles into his new role. Following Trump’s official announcement of a third bid for the White House in 2024, Smith was appointed to manage both the documents probe and a separate investigation into the events surrounding the Jan. 6 attack on the US Capitol.

After the Mar-a-Lago search, Trump successfully argued before US District Judge Aileen Cannon to appoint the special master to vet his claims for why some documents should be off limits to investigators. Cannon, nominated to the south Florida federal court by Trump, tapped US District Senior Judge Raymond Dearie, a semi-retired jurist based in Brooklyn, to serve in the role. Dearie had been Trump’s suggestion for the job, and the Justice Department didn’t object.

Trump’s lawyers and the Justice Department spent the following months combing through the thousands of documents and identifying disputes over how to categorize them. Trump’s core objections narrowed over time to two main issues – that he’d designated a number of government records as “personal” under the federal Presidential Records Act or that certain materials were covered by executive privilege.

Following initial wins before Cannon, however, Trump faced a series of setbacks. The 11th Circuit agreed with the Justice Department that about 100 documents with classified markings should be carved out of the special master review process, and the US Supreme Court rejected Trump’s request to intervene.

The Justice Department then challenged Cannon’s special master appointment and her injunction blocking investigators from using the documents in the criminal probe. Trump’s attorney Jim Trusty faced an openly skeptical panel of 11th Circuit judges during arguments in late November.

In the Dec. 1 opinion, the panel held that the circumstances of the Mar-a-Lago seizure – including the lack of any showing that the search was illegal – failed to meet the high bar for a court to interfere with a criminal investigation before anyone faced charges. The judges wrote that Trump’s status as a former president didn’t change that analysis.

“The law is clear. We cannot write a rule that allows any subject of a search warrant to block government investigations after the execution of the warrant,” the appeals court said. “Nor can we write a rule that allows only former presidents to do so. Either approach would be a radical reordering of our caselaw limiting the federal courts’ involvement in criminal investigations.”

Trump had until Thursday to ask the full 11th Circuit or the Supreme Court to intervene and pause the panel’s decision. When he and his lawyers didn’t act, the appeals court issued a notice known as a mandate that made the decision final.

(Updated with comment from Trump spokesperson in fifth paragraph.)