Canadian jobs lost, but not as bad as the headline suggests

OTTAWA  - The Canadian economy lost the most jobs in nine years in January, pulling back after a robust 2017 as losses were heaviest in the service sectors, data from Statistics Canada showed on Friday.

The decrease of 88,000 jobs fell well short of economists' forecasts for a gain of 10,000 and made for the biggest decline since January 2009 when the economy was dealing with the global financial crisis. The unemployment rate edged up to 5.9 per cent from December's revised 5.8 per cent.

The drop in jobs was driven by a 137,000 decline in part-time work, the biggest fall on record, which eclipsed a 49,000 increase in full-time positions.

“Don’t panic. A number like this is a little bit scary. It looks pretty bad on the surface, but remember that companies have been telling us they are concerned about labour shortages in Canada,” Frances Donald, senior economist with Manulife Asset Management, told BNN.

“This is probably a natural pullback from very, very strong labour market growth in 2017.”

Donald added the data’s effect on the loonie will also be heightened by the fact that there is no U.S. jobs report today.

“However, that’s going to sting the Canadian dollar today, there’s no question,” she said.

“It’s probably going to reduce some expectations for Bank of Canada [rate] hikes this year, which in my mind was very much due.” 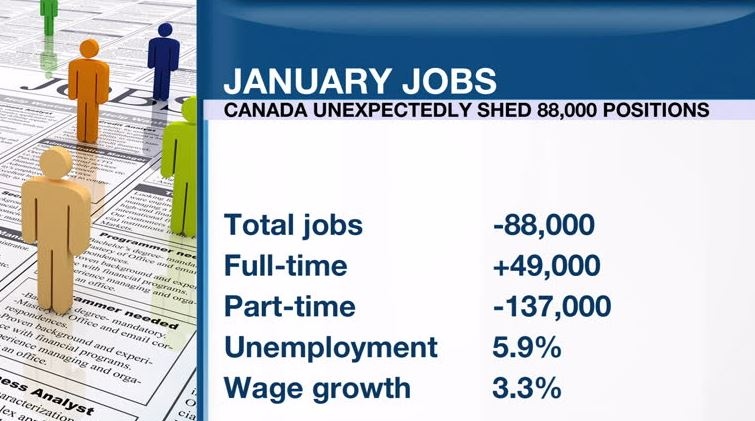 The Canadian Chamber of Commerce, however, called the job numbers "a wake-up call."

“While it would be a mistake to assume that one month’s figures necessarily indicate a trend, January’s dramatic decline in jobs should remind Canada’s governments that investment and jobs are at risk," the Chamber said in a statement late Friday.

The services sector led the way down, shedding 71,900 positions in industries including educational services, finance, insurance and real estate, and professional and technical services.

Canada racked up strong employment gains last year, creating more than 400,000 jobs and setting the fastest pace of growth since 2002.

The average hourly wage of permanent employees climbed 3.3 per cent from last January, the strongest rate of gains since March 2016. Ontario, Canada's most populous province, raised the minimum wage to $14 an hour at the start of the year, making it the highest in the country.

"The details also looking wonky, with all the job losses in part time work...and the jobless rate only moving up one tick to 5.9 per cent as the participation rate took a big three point drop," CIBC’s Chief Economist Avery Shenfeld wrote in a note to clients. "Overall, a mysterious mix of good and bad, with the latter's impact blunted by how strong job gains were in the lead up to these figures."