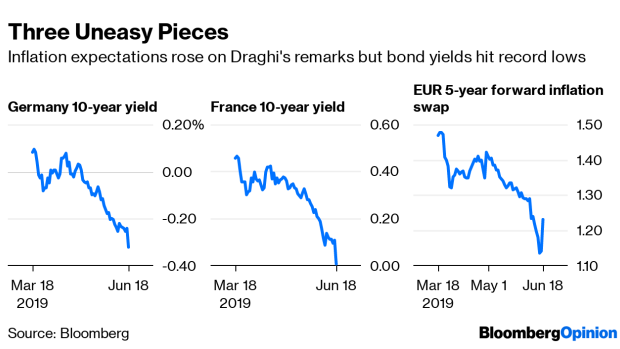 (Bloomberg Opinion) -- The euro area economy is in a real bind, as Mario Draghi admitted at this week's European Central Bank summit in Portugal. So he won’t have been too thrilled that his suggestions on how to respond were subject to a rapid and damning response from the world’s most famous Twitter account:

The messaging from the White House was as economically crude as ever (and monumentally rich, in the context of the vast stimulus on offer in the U.S. over recent years), but in fairness President Trump did manage to highlight one of the biggest risks to the European economy: A stronger euro. Indeed, while the ECB is always at pains to stress that the value of the euro lies outside its remit, the currency surely figures highly in the minds of the bank’s decision-makers.

Draghi is now emphasizing rate cuts rather than making a concerted effort to restart quantitative easing (the large-scale purchasing of bonds). It was a policy mistake to end QE at the end of last year given the fragile state of Europe’s economy, but it would take a lot of time to renegotiate its reintroduction with the euro zone’s central bankers. Targeting borrowing rates is simpler and quicker. As negative rates have been around for a long time already, it’s hard to have much faith in them helping to fix the ECB’s weak inflation problem. But they can serve one important purpose: Preventing the euro from rising.

If the euro strengthens substantially, it will choke off any chance of Europe's export-led economy recovering from what’s becoming a prolonged slump and it might precipitate a recession. Trump’s trade wars have only added to the woes of local manufacturers, with Germany suffering badly.

The ECB will of course couch any rate cuts in terms of correcting inflation expectations that have fallen to record lows (although Draghi’s speech this week did at least prompt a slight rise in those forecasts). Sadly, the brutal reality is that additional monetary stimulus will have little effect on boosting European inflation, which is being held back by global disinflation.

The omens for the euro area economy certainly don’t look promising. The yields on Germany’s 10-year bunds are headed unerringly for the ECB's minus-40 basis point deposit rate, and even the yields on French 10-year notes have fallen below zero. This is not a sign of market confidence.

All of this points to an important argument made by my colleague Ferdinando Giugliano, and which reflects the frustrations of Draghi himself as he prepares to step down in  the autumn: The ECB should not be solely responsible for stimulating growth; Europe’s political leaders need to step up too.

The single currency area is crying out for a proper fiscal policy, but politicians seem determined to wait for another crisis before galvanizing a credible response such as a proper joint budget. It would be unfortunate if a currency spat with Trump was the catalyst by driving the euro stronger.