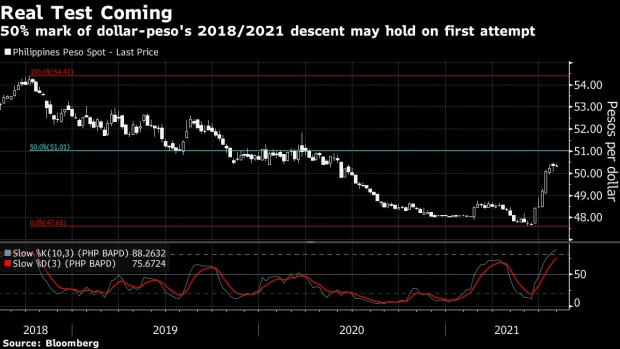 (Bloomberg) -- July was a brutal month for the Philippine peso and there appears to be little respite on the horizon.

After capping its steepest monthly decline in over three years, the currency could extend losses due to a worsening virus outbreak and the risk of a sovereign rating downgrade. It may drop toward 51 per dollar, a level last reached in April 2020, according to ING Groep NV, Security Bank Corp. and Malaysian Banking Bhd.

The peso’s resilience is being tested as the authorities struggle to contain the spread of the delta variant and slowing economic growth erodes government revenue. Volatility in the currency has increased, suggesting that traders could be bracing for more downside in the months ahead.

“We do see the peso on the back foot from here on as growth will likely take a hit from the delta variant, while investors become more worried about the fast deteriorating fiscal metrics,” said Nicholas Mapa, senior economist at ING in Manila. “A stark drawdown in gross international reserves may also open the flood gates for further peso weakness.”

The peso declined 2.3% in July, its biggest monthly drop since January 2018 and the worst performance among Asian currencies after the Thai baht. It fell to as low as 50.5, its weakest level in more than a year.

A key risk for the Philippine currency is the threat of a sovereign rating downgrade as the outbreak takes a toll on growth. Fitch Ratings revised the nation’s credit outlook to negative from stable in July, citing the impact of the pandemic on the economy and public finances.

The Manila capital region, which accounts for about a third of the economy, will be in a strict lockdown from Aug. 6 to 20 and extra curbs on movements will be imposed in the interim, the authorities said last week. The restrictions on the capital will cost the Philippine economy 105 billion pesos ($2.1 billion) a week, according to Economic Planning Secretary Karl Chua.

A slower pace of expansion could hurt public revenues and add to the debt burden. In its downgrade of the nation’s credit outlook, Fitch estimated that the general government debt-to-GDP ratio will rise to 52.7% and 54.5% in 2021 and 2022, respectively, from 34.1% in 2019.

The peso closed at 49.970 on Friday. The median forecast of a Bloomberg survey of strategists is for the currency to climb to 48.5 by year-end.

For now, the peso may also be weighed down by weaker sentiment after the Philippines was added to the watch list for terror financing by the Financial Action Task Force, a global anti-money laundering body, in June. The inclusion may hurt investment, and make it harder to access financing from institutions such as the International Monetary Fund and the World Bank.

“We could have seen an outflow as some companies may not be allowed to deal in jurisdictions that have been tagged as part of the grey list,” said ING’s Mapa.

The Philippines could be removed from the FATF’s monitoring list on or before January 2023 or “upon successful completion of all action plans” that counter money laundering and terrorism financing, central bank Governor Benjamin Diokno said in June.