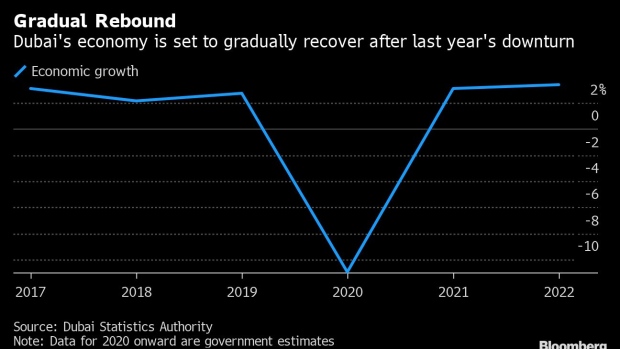 An 'Expo 2020' sign at the entrance to the exhibition site in Dubai, United Arab Emirates, on Tuesday, Sept. 28, 2021. The city is opening up to visitors for the World Expo from next month (Oct. 1 - March 31) and expects the event to attract 25 million visits -- both virtually and in person. , Bloomberg

(Bloomberg) -- One year after the pandemic forced a delay, Dubai is set to open its $7 billion Expo on a desert site the size of 600 football fields.

Having spent years preparing for the event, the city hopes that an exhibition featuring autonomous vehicles, a pavilion shaped like falcons and one with an original Pharaoh coffin will attract enough tourists to help solidify a nascent economic recovery.

Starting Friday, diplomats, dealmakers, artists and musicians will fly in from around the world. The city has stuck to its target of 25 million visits -- both virtually and in person -- and at a time when travel restrictions have slowed business across financial centers, the six-month long exhibition may even help to create a template for others to follow.

What’s It Like to Visit Dubai Now? Covid Comfort as Expo Arrives

Dubai has shunned lockdowns since emerging from one last year, keeping its economy open and embarking on an ambitious vaccination drive. The United Arab Emirates, of which Dubai is a part, has inoculated more than 80% of its population and infections rates have dropped. The country is now placed sixth on Bloomberg’s Resilience Rankings.

“There’s a good balance between keeping the city open for business and managing the public health issue,” said Nabil Alyousuf, a former senior UAE official who is the CEO of Dubai-based International Advisory Group.

An influx of tourists will benefit the city, given that a third of its economy is made up of sectors like hospitality and wholesale and retail trade. Dubai government employees will even get six days off to visit the event. Capital Economics economist James Swanston, however, cautioned long-term effects may “fail to live up to policymakers’ hopes.”

For now, employment numbers at least are looking up. The city’s flagship airline is planning to recruit thousands over the next six months and hoteliers are adding jobs.

The event may also help lay a platform to reverse last year’s steep population decline, which the government is trying to address through programs to lure foreigners. Alyousuf of IAG said the Expo will encourage more high-net worth individuals to either move to the city or establish a second base.

“Although footfall is the most visible and easy to measure sign of success, there are other benefits that are harder to visualize and accrue over a number of years,” said Scott Livermore, chief economist for Oxford Economics Middle East in Dubai. “Benefits also accrue through marketing Dubai and a successful Expo can create and help sustain a perception about Dubai as a place to live, work and invest.”

And as the skyscraper-studded emirate looks to defend its status as the Middle East’s leading business hub amid growing competition from Riyadh, it can now lay claim to having hosted the Arab world’s first expo.