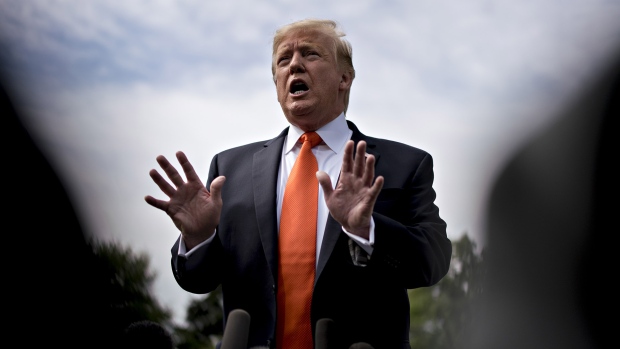 Retail investors in exchange-traded funds have found a smart strategy to deal with the never-ending stream of market drama inspired by President Donald Trump: Ignore it.

This group of investors has most likely earned more in the market than the professionals since Trump was elected by continuing to allocate and disregarding the continuing drama between him and the media. While retail investors are sometimes viewed as “weak hands” or “dumb money,” in the case of passive funds, they’re arguably strong and smart. They have put money into the market every month since Trump was elected in November 2016, ignoring trade tensions, the Mueller investigation and a host of other issues that the market has managed to live through on its way to new heights.

The pattern goes like this: Trump says something provocative and the media reacts with over-the-top headlines that make it seem as if the sky is falling. Lather. Rinse. Repeat. This 24/7 cycle makes it even harder than normal to stay the course as an investor. There is literally always a reason to panic and sell.But had retail investors panicked — as some ETF traders did — they would have missed out on a big chunk of the S&P 500’s return of 33 per cent since Trump took office, which is 12 per cent annualized — well above the historical average of 9 per cent. Returns have also totaled 19 per cent in emerging markets, 19 per cent in international developed markets and 7% in bonds. And these figures include the recent May sell-off and a dismal 2018, which was dampened by rising rates and a hawkish Federal Reserve.

Many — including myself — will sometimes take total ETF flows or total fund flows to indicate retail investor sentiment. But this is not necessarily the case given the growth of ETFs and the different types of investors that use them. We know both data-wise and anecdotally that traders and institutions tend to prioritize liquidity over cost and thus flock to ETFs such as SPY, IWM and QQQ. Many use them in place of futures. As a result, rapid outflows from these ETFs are sometimes interpreted as “retail investors capitulating” when in fact the opposite is true. What’s happening is traders are trading.

Meanwhile, the buy-and-hold retail investors — many of whom are led by their advisers — keep investing. These longer-term investors tend to prioritize cost above liquidity and thus allocate to ETFs from Vanguard, Schwab and the iShares core series. To help clarify this distinction between the two groups, Bloomberg Intelligence created two indexes to track flows for each group, comprising ETFs focused on “risk-on” asset classes such as U.S. and foreign stocks, non-defensive sectors and junk bonds.

Each side adds up to about US$600 billion for balance and is intended to act as a proxy for sentiment of each group. Could you potentially find examples of retail investors using SPY or a trader using VOO? Yes, but generally speaking, the opposite is true. ETFs are unusual instruments in that they can appeal to a range of investor types with different goals. They are akin to a Swiss army knife with its many uses and users. This is why flow-reading can be harder than it looks.

This ability of these allocators to ignore the noise goes beyond the Trump era. It is just more pronounced now and arguably more impressive given the increased theatrics. And not only have these investors gotten the most out of the bull market by hanging in there, they are keeping almost every last drop of those returns because these ETFs tend to cost next to nothing.

This is why it may be time to once and for all retire the “dumb money” and “smart money” labels- or maybe even switch them around. Because if the goal is to grow your wealth, then it is smart to be dumb.