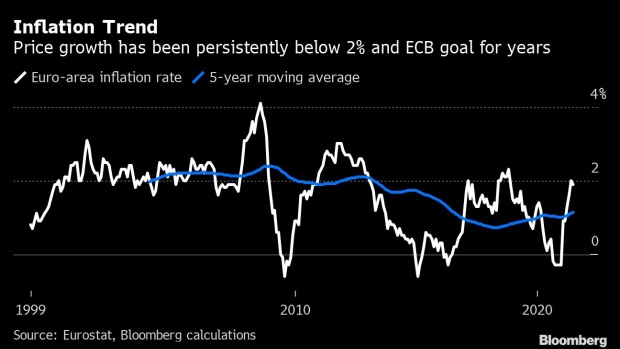 (Bloomberg) -- The European Central Bank should consider keeping some of the flexibility of its emergency bond-buying program when it transitions to other asset purchases after the Covid crisis, Governing Council member Pablo Hernandez de Cos said.

“The main lesson to be drawn” from the program is that the power to skew purchases toward parts of the economy that need it most “has notably increased not only the effectiveness but also the efficiency” of it, the Bank of Spain Governor said Tuesday in a written response to questions from Bloomberg.

“It would therefore be desirable to discuss the possibility of our future purchase programs retaining some of the flexible elements,” he said.

The remarks augur potentially tense meetings when policy makers start formal talks on how to shift their priorities from crisis-fighting to hitting their inflation goal. Bond-buying programs have been a sore point for years with some officials, who fear they build financial stability risks and undermine the incentive for governments to keep their finances sound.

The 1.85 trillion-euro ($2.2 trillion) pandemic program is especially powerful and has been used to keep borrowing costs down in the worst-hit countries such as heavily indebted Italy. It is also explicitly temporary, scheduled to run though March 2022 or until the Governing Council judges that the coronavirus crisis phase is over.

ECB President Christine Lagarde told Bloomberg this month that the program could “transition into a new format.”

Hernandez de Cos, considered to be among the dovish Governing Council members, said it was “too soon” to say when discussions on post-crisis measures should start.

But he also suggested the ECB’s decision last week to alter its guidance on future policy is a sign that changes are coming to boost inflation.

“Our new forward guidance is the first example of our determination to take action,” he said.

Hernandez de Cos argued that the ECB’s focus going forward should be on being “persistent” in its actions and “maintaining” a sufficient level of stimulus.

The ECB said last week that interest rates will stay at current or lower levels at least until its projections show inflation hitting 2% “well ahead” of its forecast horizon. The deposit rate is currently -0.5%.

Hernandez de Cos said he agreed with comments from his ECB colleague Francois Villeroy de Galhau, the Bank of France governor, that “well ahead” means within 12-18 months. The latest forecasts run to 2023, when price growth is seen averaging just 1.4%.

That change to guidance followed a strategic review in which the ECB raised its inflation target from just-under 2%, and acknowledged that it might overshoot.

Investor reaction has been mostly muted though. Inflation expectations, a key measure of future price growth, have barely budged. Hernandez de Cos noted that expectations were slow to shift when the U.S. Federal Reserve unveiled its own strategic review last year and implemented average inflation targeting.

“The market and analysts need time to process all the new features included in our strategy review and to analyze its implications,” he said.

Still, commentators are seeking more specifics on what the central bank will do next. Most expect its older asset-purchase program -- which is constrained by tighter rules and running at 20 billion euros a month -- to be ramped up as pandemic buying is tapered.

Officials are widely expected to discuss their plans at the next policy meeting in September, when they’ll have new economic forecasts and a better sense of how coronavirus infections are progressing.

Hernandez de Cos has called for a broader definition of what a full recovery from the coronavirus crisis means, in a sign that he may be open to extending the emergency program.

It “should remain in place while the pandemic and its effect on the economy persist,” he said. “Against a background of still very high uncertainty as at present, we should not get ahead of ourselves.”