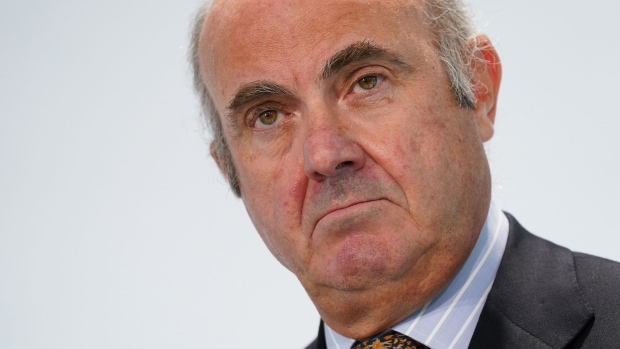 BERLIN, GERMANY - SEPTEMBER 12: Luis de Guindos, Vice President of the European Central Bank, speaks to the media at the conclusion of an informal meeting of European Union ministers for economic and financial affairs on September 12, 2020 in Berlin, Germany. The meeting took place under the current German presidency of the European Council. (Photo by Sean Gallup/Getty Images) , Photographer: Sean Gallup/Getty Images Europe

“When you have difficulties to find out what are the real fundamentals of an investment, then what you’re doing is not a real investment,” Guindos said in a Bloomberg TV interview on Wednesday. “This is an asset with very weak fundamentals and that is going to be subject to a lot of volatility.”

The value of Bitcoin and other tokens has plummeted in recent days, driven in part by criticism from Tesla Inc. chief and one-time proponent Elon Musk, as well as the risk of greater regulatory scrutiny. Some traders may have also been taking profits after a spectacular run to nearly $65,000 in April.

The ECB said earlier in its Financial Stability Review that the risks posed by Bitcoin to the wider system appear to be limited, even as the surge in prices “eclipsed previous financial bubbles like the ‘tulip mania’ and the South Sea Bubble in the 1600s and 1700s.”

“The situation we had some months ago when prices were rocketing is not very different to the one that we have now when prices are moving down,” Guindos said.