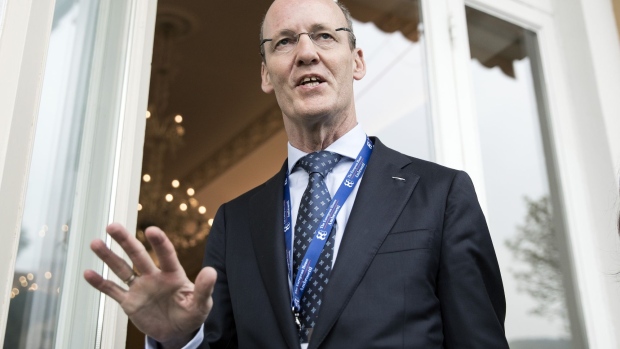 Klaas Knot, president of De Nederlandsche Bank NV, gestures as he speaks to members of the media during the 30th edition of "The Outlook for the Economy and Finance," workshop organized by the European House - Ambrosetti in Cernobbio, near Como, Italy, on Saturday, April 6, 2019. The workshop, attended by central bankers, politicians and executives, looks at the European economy and financial markets. Photographer: Alessia Pierdomenico/Bloomberg , Bloomberg

Interest rates will start to edge up once central banks begin unwinding their most important stimulus programs in the first half of next year, Klaas Knot, a European Central Bank Governing Council member, said Sunday.

“You can assume that the time of high interest rates won’t come back, a high rate in the future would be 3 to 4 percent,” Knot said on the WNL television program on Sunday. The Dutch central bank governor, considered one of the more hawkish members of the Governing Council, also said he he sees the current jump in inflation as a mostly transitory.

“It is highly relevant to determine whether this is a temporary phenomenon and goes away or not, and whether this becomes a risk and has secondary effects through higher wages and costs, and that is not the case now,” Knot said. “At this moment, we see it as mostly temporary as our economy is reopening after the corona shock and the supply of products is not keeping up with demand.

The remarks precede a major debate at the ECB as it prepares for a transition to post-pandemic stimulus at a time when global counterparts, which are increasingly focused on the threat of a price spiral, remove support. The Frankfurt-based central bank is expected to announce the next steps for its emergency bond-buying program in December.

Separately, Knot argued for a higher tax on the surplus value on homes in the Netherlands in an effort to cool housing prices. Homeowners would be compensated through lower taxes in other areas, he said. Last week, he labeled an “exuberant rise” in house prices in the Netherlands as a risk to financial stability, and argued that banks don’t take sufficient account of the systemic risk inherent in the housing market.