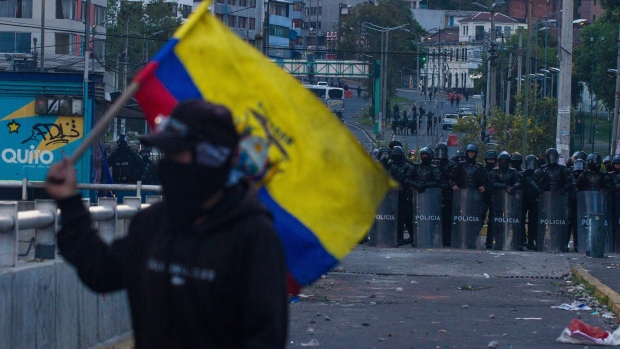 (Bloomberg) -- Ecuador President Guillermo Lasso faces the threat of being removed from office as a hostile congress resumes an impeachment debate on Tuesday after violent protests paralyzed broad swathes of the South American country.

The fragmented National Assembly resumed the debate midday after extensive deliberations over the weekend. President Virgilio Saquicela, an independent, told reporters on Tuesday morning that he intended to call for the vote right after the debate finishes even if the rules say he has up to 72 hours to conclude the process.

Hard-left opposition party Revolucion Ciudadana, close to former President Rafael Correa, is pushing for the removal of Lasso, 66, under a constitutional clause that permits the Assembly to dismiss the head of state if the country is going through a major domestic crisis. The party controls 47 seats and needs another 45 to reach the 92-vote threshold needed for impeachment, or two-thirds of the 137 member unicameral congress.

If impeached, Lasso would immediately be replaced by Vice President Alfredo Borrero, who would act as caretaker until early presidential and legislative elections are organized. However, the president still has the option to prevent his removal by dissolving congress, which would also trigger early elections but allow him to govern through executive decree in the meantime.

Ecuador has been hit by unrest and violent clashes for the past two weeks due to protests led by indigenous groups over rising prices of fuel and food. The demonstrations have disrupted oil production and become the biggest political crisis for the conservative former banker.

Protesters from communities in Ecuador’s Amazonian territories have hobbled the production of oil, the country’s main export, by targeting wells and severing supply lines. An overnight attack on an oil convoy near Shushufindi left one soldier dead and seven injured, the defense ministry said on Tuesday.

As of Sunday, daily crude output had been more than halved to about 233,000 barrels from the average 522,000 barrels a day before the protests erupted.

Lasso has made several concessions worth more than $600 million to try to dissipate the unrest, including lowering gasoline prices, and his government spent Monday negotiating with some of the indigenous groups.

While the result of the vote is a close call, the opposition will find it hard to get the 92 votes needed given the public opposition expressed by other political parties, said Marcelo Espinel, deputy director of Fundacion Ciudadania y Desarrollo, a Quito think tank.

“This will also allow Lasso to make some concessions in the dialog,” he said.

Still, the procedure will likely secure between 70 and 80 votes as the indigenous Pachakutik party and independents join Revolucion Ciudadana, leaving Lasso “very vulnerable to future unrest and impeachment efforts,” according to Eurasia Group’s analysts Risa Grais-Targow and Yael Sternberg.

Across Latin America, accelerating inflation and diminishing income are threatening governments and prompting an uptick in subsidies to soften the blow on a population that is emerging from the pandemic more unequal and poorer. The indigenous groups leading the Ecuador protest paralyzed the country in 2019 with similar actions against then president Lenin Moreno.

Default-prone Ecuador has been among the most politically volatile countries in the region, with seven presidents governing the country between 1996 and 2007 until the arrival of Correa. Riding the commodities super-cycle of the beginning of the century, Correa stayed in power for over a decade before moving to Belgium and being convicted for embezzlement in absentia in 2020.

The country’s dollar bonds have sunk nearly 18% this month alone, pushing yields up to above 13%. The extra yield investors demand to own the bonds over US Treasuries stands at 10.77 percentage points, a level considered distressed and at risk of non-payment.

Lasso, who has focused on stabilizing the macroeconomy at the cost of neglecting other issues, has effectively lost control over major parts of the country during this crisis, according to political scientist Simon Pachano at FLACSO University in Quito. The unrest is also partially explained by the radicalization in recent years of parts of the indigenous movement, he said.

“This is a very grave crisis of the state,” Pachano said.

(Updates with comment by by congress president in second paragraph, Lasso’s right to dissolve congress in fifth paragraph.)