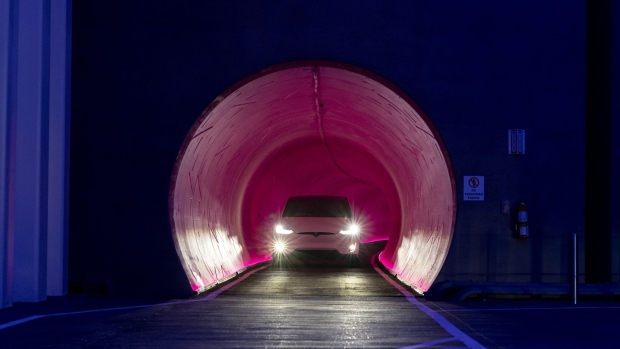 Four years ago, Elon Musk embarked on an ambitious project to connect Washington and Baltimore with an underground tunnel. One year later, Musk’s tunneling company, Boring Co., announced another splashy endeavor: building an underground transit system to shuttle fans to Los Angeles’s Dodger Stadium. Today, neither is close to completion.

Both projects are currently mired in a regulatory no man’s land of environmental review and have not broken ground. Now, Boring Co. has removed all mention of either of them from its website—a suggestion that Musk is backing away from the projects.

“Big infrastructure projects tend to lurk in people’s minds for long after they have died a peaceful death,” said Dena Belzer, president of consultancy Strategic Economics and a lecturer in regional planning at the University of California, Berkeley. “I think you can declare these dead.”

The Baltimore-to-Washington Loop, Boring Co.’s term for its electric-vehicles-in-tunnels system, announced in 2017, made it the farthest of the two. Boring Co. bought a piece of property in Washington that could serve as a potential station, and in 2019, Maryland and federal transportation officials released their 411-page draft environmental assessment of the project. That was two years ago. The next step, if it comes, would be the Federal Highway Administration declaring that the project would have no impact, or triggering a more in-depth review known as an Environmental Impact Study.

The Dugout Loop, announced in 2018, hasn’t even made it that far. Last year, city officials said the project was in environmental review—in this case, meaning that an outside firm was studying environmental impacts of the project. No report has appeared in public. When asked about the Dugout Loop’s current status, officials referred inquiries to Boring Co., which didn’t respond to emailed questions.

The Los Angeles Dodgers also did not respond to requests for comment. The state of Maryland’s transportation department referred questions to Boring Co. and the Federal Highway Administration, which said that whether or not the company moves forward and on what timetable is a question only the company can answer.

Anticipation for the Dugout Loop was particularly high. Three years ago, the then chief financial officer for the Los Angeles Dodgers, Tucker Kain, talked up a plan to transport fans from nearby neighborhoods to the team’s stadium in minutes. But last year, a deadline passed with  no tunnel opening.

The stalled progress of two of Boring Co.’s major projects underscores the immense structural and regulatory challenges for Musk’s company, which aims to build tunnels deep underground and shuttle Tesla vehicles through them. Other projects have been scrapped or pushed back before. Those include a plan for a tunnel to O’Hare International Airport in Chicago that sputtered when its biggest champion, then Mayor Rahm Emanuel, said he wouldn’t run for reelection in late 2018. Another proposal for a tunnel on Los Angeles’s west side died after residents sued. And the Baltimore-Washington tunnel itself was already scaled down from an initial vision for a New York-to-Washington link.

Despite such setbacks, Boring Co. has made strides in recent months. Last week, in Las Vegas, convention center officials showed off a newly completed just-under-a-mile-long system to reporters. Meanwhile, the company’s plans to add a broader city-wide system in Las Vegas are moving ahead with initial approval from authorities. The company is studying the soil and groundwater conditions before applying for permits, a city spokesman said.

As for the other projects, it’s still possible that the Dugout Loop or the D.C.-to-Baltimore Loop will get revived one day. “Things do come back in a morphed form,” said Belzer, the consultant. “You could always qualify your death certificate with the zombie disclaimer.”