After a period caught in trade-war hell, emerging-market assets are showing signs of a rebound.

Two years since U.S. President Donald Trump’s tariffs against China interrupted their advances, developing-nation stocks and currencies have won back lost ground. Momentum, relative value and stock valuations are back to levels seen at the start of the trade tensions, suggesting a second leg of the aborted rally may be nearing.

That takes emerging markets almost full circle after the meltdown in 2018 erased US$5.8 trillion from stock values and sent currency volatility to a 31-month high. Now, with the world’s two largest economies nearing a phase-one deal, investors can at last look beyond the trade war and take advantage of faster growth in the developing world, as well as moderate inflation and accommodative central banks.

But emerging markets may not be out of purgatory just yet. The full-year outlook for the asset class doesn’t normally take shape before late January and investors may wait another couple of weeks before deciding asset allocations.

In the meantime, these metrics may give them hope:

The MSCI Emerging Markets Index of stocks and its currency counterpart are both seeing buying accelerate. The 14-week Relative Strength Index for the equity gauge has risen to the highest level since January 2018, the month the sell-off began. The measure for currencies is back to levels last seen at their peak in April of that year. 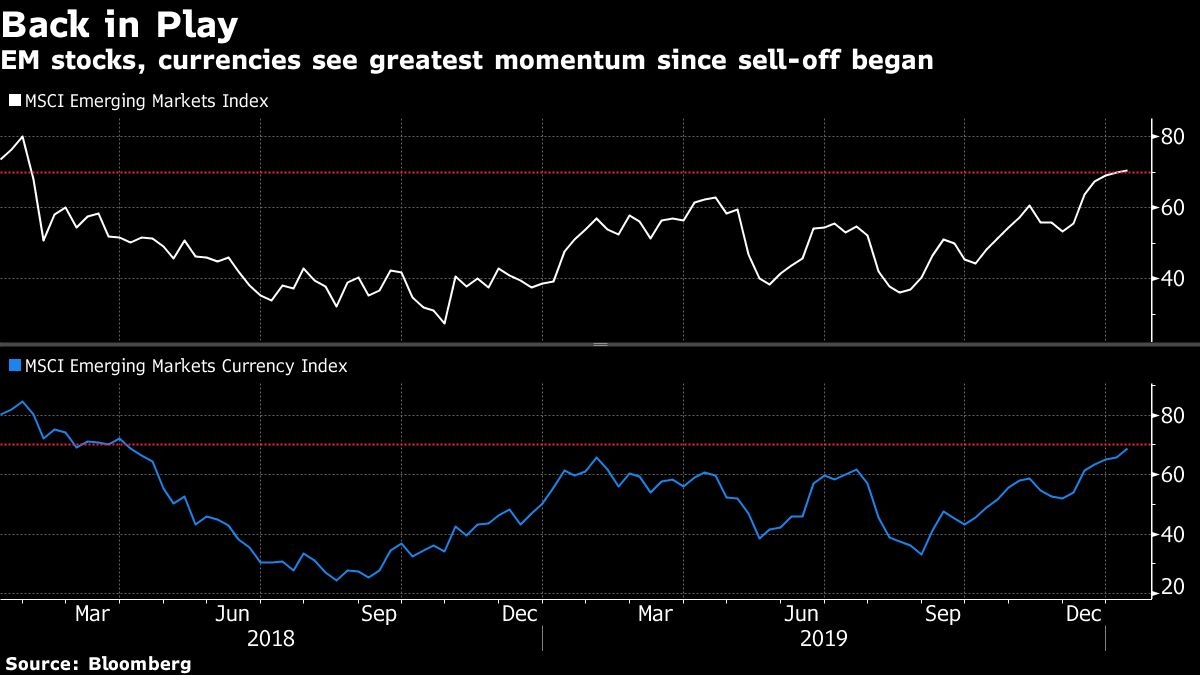 Equity valuations, as measured by the price-to-estimated earnings ratio, have surged, but they’re still slightly lower than the level seen in January 2018. Still, another measure — enterprise value as a multiple of earnings before interest, taxes, depreciation and amortization — has skyrocketed to a high of more than two years.

(Note: Enterprise value measures the worth of a company to both shareholders and creditors, unlike market capitalization which tracks only the equity value. Its increase means emerging-market companies come with lower risks for both types of capital providers.) 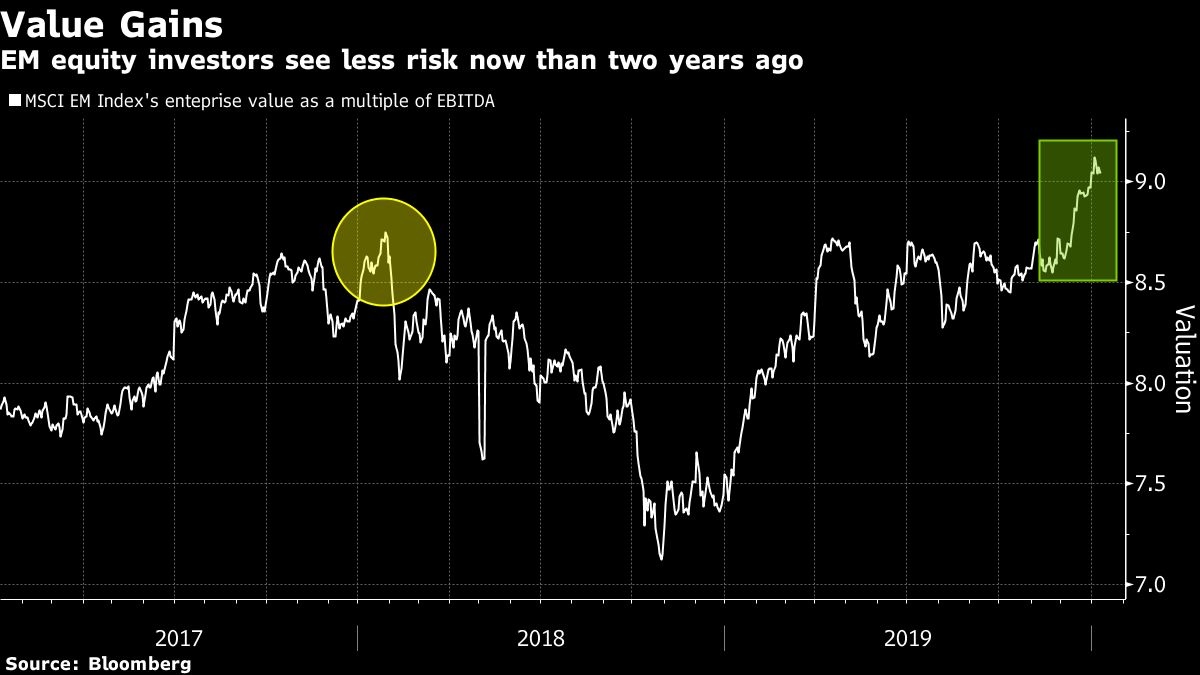 The bumpy rebound in emerging-market stocks that took hold after October 2018 has continued, even as commodity prices stay weak. The divergence shows that the outlook for developing nations now depends on stocks of consumer companies and technology firms, rather than their traditional champion, raw materials.

The equity gauge has risen to the highest level relative to the Bloomberg Commodity Index since the start of the trade war. 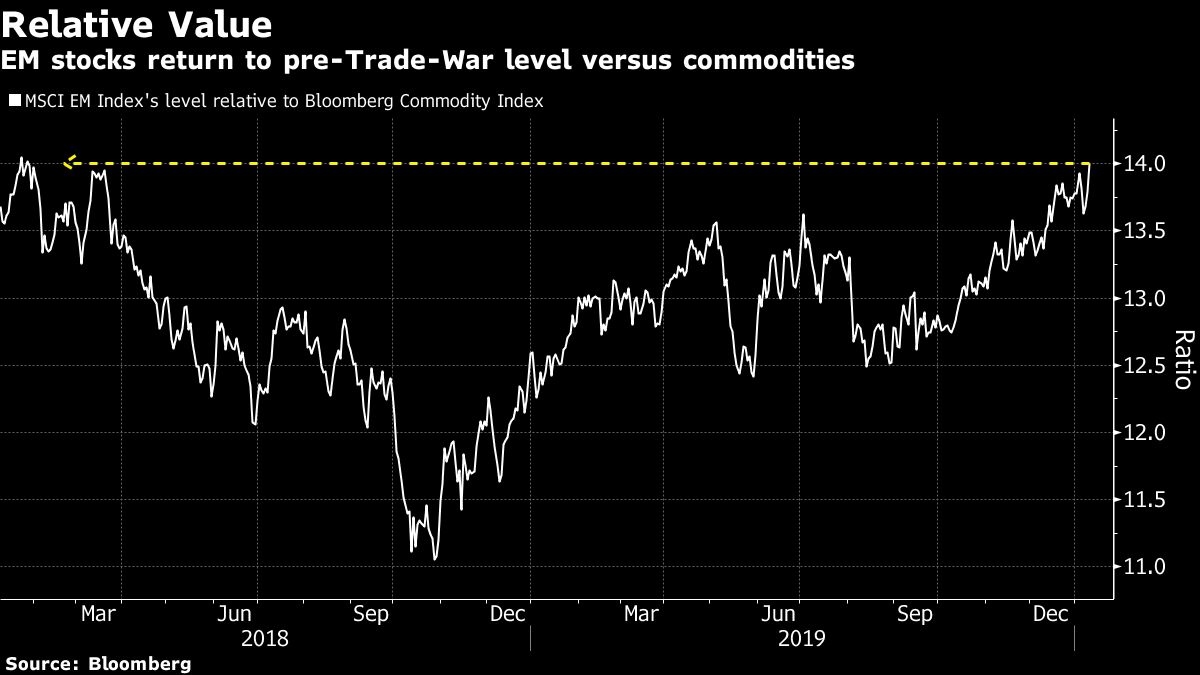 That’s not to say all-round bullishness has returned to emerging markets. Stocks are still about US$2.2 trillion poorer (not counting Saudi Aramco) and the currencies index is 3.6 per cent lower than its 2018 peak. Bond yields and spreads have a little further to go before erasing losses.

Yet, these green shoots of recovery may give heart to emerging-market investors hoping to look beyond the trade war.