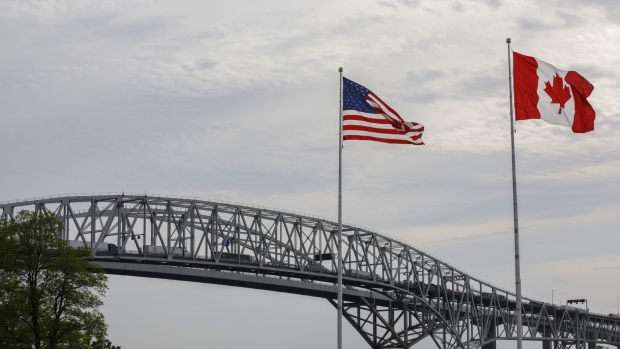 Canadian and U.S. flags fly at the base of the Bluewater Bridge, which connects Canada and the U.S., near the Enbridge Line 5 pipeline in Sarnia, Ontario, Canada, on Tuesday, May 25, 2021. Enbridge Inc. said it will continue to ship crude through its Line 5 pipeline that crosses the Great Lakes, despite Michigan Governor Gretchen Whitmer's order to shut the conduit. , Bloomberg

(Bloomberg) -- Enbridge Inc. won a battle in its fight with Michigan’s governor to keep its Line 5 pipeline operating after a judge ruled the legal battle over the oil conduit belongs in federal court.

Judge Janet Neff of the US District Court for Western Michigan rejected Governor Gretchen Whitmer’s effort to move the case to state court, pointing to the “important federal interests at stake in having this dispute heard in federal court,” according to the ruling. Michigan has sought home-court advantage in its litigation to shut the line.

“This properly keeps the Michigan Attorney General’s lawsuit in federal court and underscores that the State’s attempts to shut down this critical energy infrastructure raises important federal questions of interstate commerce, exclusive federal jurisdiction over pipeline safety and the serious ramifications for energy security and foreign affairs,” Ryan Duffy, Enbridge spokesman, said in a statement.

Whitmer has ordered Enbridge to shut Line 5, arguing it is a threat to the Great Lakes because it presents an environmental threat where it crosses through Straits of Mackinac, where Lake Michigan and Lake Huron connect. Enbridge has refused to comply, arguing the governor is exceeding her authority, and federal jurisdiction applies.

The governor’s office did not immediately respond to a request for comment.

Enbridge wants to build a tunnel under the waterway to make the line more secure. The Canadian government recently backed Enbridge in its fight to keep the line in operation and invoked provisions of a 1970s treaty to defend the line’s operation, elevating the dispute to an international level.

Line 5 supplies propane to Michigan homes, as well as light crude to refineries in the US Midwest and Ontario.